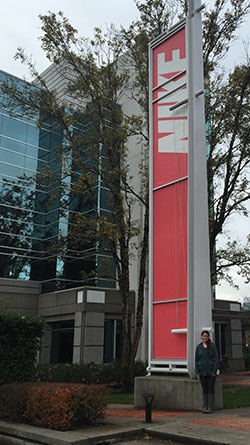 Just two years after graduating from George Mason University, Kelsey Moore is working at Nike headquarters in Oregon on a global sports initiative.

Moore, who received a master's degree in international sport management from the School of Recreation, Health, and Tourism, was able to parlay a lifetime interest in sports, her academic background, and significant experience abroad into a contract project manager position.

"Our group works on projects to get people to move again," says Moore, who is part of Nike's Global Community Impact, a group that promotes positive experiences in youth sport in order to combat a growing lack of physical activity among young people. "I have colleagues in the United Kingdom, China, and Brazil, which along with the United States are our four main focus areas in terms of promoting physical activity."

Moore grew up playing soccer, lacrosse, and volleyball in Syracuse, New York. She chose George Mason University because of the opportunity to focus on international sport management. She credits the program, faculty, and research with putting her on track to a career that combines a passion for sports with a focus on global development. 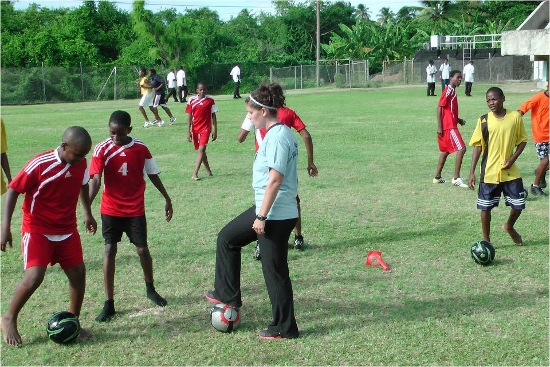 For her master's degree project, Kelsey Moore, MS '12, studied sport and development on the island of Saint Lucia in the Carribean.

As part of her master's project, she worked for six months for the Sacred Sports Foundation in Saint Lucia. Then she joined Play Soccer Nonprofit International as a program development director in Ghana. Prior to coming to Mason, she worked in Kenya for two years helping to train young coaches to mentor thousands of children through the Kisumu Youth Football Association. It was there that she also learned Swahili. 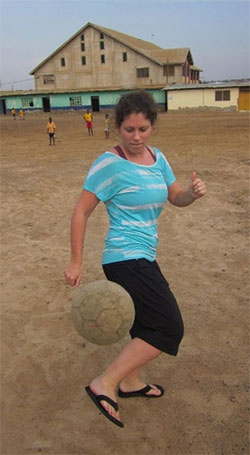 All this hands-on experience added up when she headed to Oregon. Moore says that the proximity of family and the fact that many sports companies are on the West Coast made the decision to relocate an easy one. “Some people call it ‘Sportland,’” she says, jokingly. “Nike is here, Adidas has a huge office here, Columbia Sportswear is here, and a lot of snowboarding and skiing companies.”

One of the impressive traits of many Mason students is how hard they work to take advantage of the opportunities they get. Moore is emblematic of that drive, getting a foot in the door in order to pursue her passion.

What she learned at George Mason, she says, is put to use every day. "The way I can contribute at Nike is largely through things I learned in school — classes like research methods and the whole process you go through to do a capstone research project," says Moore. "The critical thinking and strategic thinking in order to solve problems are extremely helpful here." She particularly enjoys the Nike culture and her colleagues, who come from a variety of different backgrounds. “It feels like a start-up. My colleagues inspire me with their intelligence and strategic thinking.”

A career dedicated to making a global impact was a logical choice, Moore says. "Our world is so connected nowadays that contributing to change around the world is part of being a global citizen."

This article, a version of which originally appeared on Mason News, was written by Sudha Kamath and Marissa Parks.