More than 1,000 players, umpires, families, coaches, and even a few dogs (!) played softball and remembered the life and service of Kyle Wilson over Labor Day weekend.

The tournament, now in its third year, benefits the Kyle Wilson Endowed Scholarship, which was established in honor of a George Mason University alumnus who tragically lost his life while fighting an early morning, three-alarm house fire in 2007. Kyle Wilson graduated with a BS in Athletic Training in 2005, and was a member of Fire Station 12 in Woodbridge, Virginia. 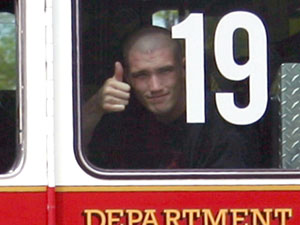 The tournament fielded 35 teams this year, more than double the number since the first tournament in 2011. “Team Mason” included many faculty, staff, and students, and was coached by Charvis Campbell, assistant dean for University Life at the Science and Technology Campus.

“It is an ongoing and inspiring outpouring of support by this community for their fallen hero,” said Rebekah Dickinson, assistant director of development for the College of Education and Human Development. The softball tournament is one of three events held each year to raise funds for the scholarship, which was established by the Wilson family and the Prince William County Professional Firefighters local chapter of the International Association of Firefighters.

The scholarship is awarded annually to an outstanding undergraduate student in the School of Recreation, Health, and Tourism who exhibits Kyle's leadership, values, academic achievement, and passion for physical fitness and who has been admitted to the professional phase of the Athletic Training Education program.

The softball tournament and other events is a labor of love for those touched by the life of Kyle Wilson, including volunteer coordinator Cherish Green, whose husband is a Prince William County Firefighter, and Drs. Amanda and Shane Caswell of the university’s faculty, and many others.

To donate to the scholarship, please make a tax deductible donation online at supportingmason.gmu.edu (write in “Kyle Wilson Scholarship” under "Other Established Fund") or send your gift to: