We couldn't be more proud of Dayton Moore, general manager of the resurgent Royals, for the way he has led the Kansas City team to this year's World Series.

Moore played for George Mason's baseball team in 1989 and graduated with a bachelor's in physical education and a master's in athletic administration (now called sport management). His meteoric rise after joining the Atlanta Braves eventually led to his position as general manager of the Royals. 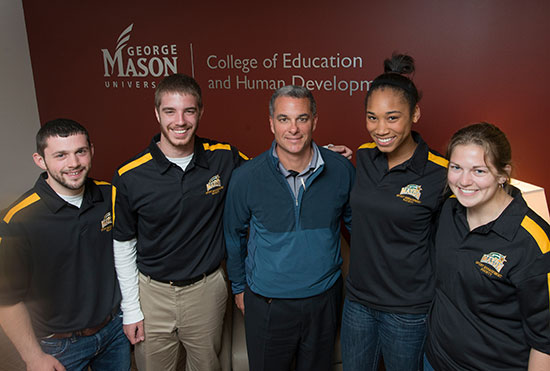 Dayton Moore, general manager for the Kansas City Royals, poses with Sport Management students after a small, roundtable discussion with them on leadership, management, and success. Photo by Evan Cantwell/Creative Services/George Mason University.

Moore has recently been the subject of media profiles complimenting his visionary leadership — for example, in The New York Times and The Washington Post  — as well as news about the Royals-Mason connection on CBS Radio and other outlets.

"Family is a big part of the success of any organization," said Moore, as reported in The Washington Post. "The fact that we understand that and respect that part of it, I think helps you stay strong through some of the difficult challenges."

That bond and connection forged during their George Mason college years has been an enduring and spectacularly successful one.

Dayton Moore remains close to Bill Brown, the George Mason coach he played under who continues as head coach of the Patriots. The former second baseman was a standout player and still shares the school record for most games played in a season.

Moore was named the Major League Executive of the Year (2005) and was appointed to the board of directors of the National Association of Intercollegiate Athletics (NAIA) Champions of Character Program (2007), a program that instills an understanding of character values in sport and provides practical tools for students, parents, and coaches in modeling exemplary character traits.

He returns to campus frequently to speak to and inspire students in the Sport Management program about qualities of leadership and character that lead to professional and personal success, including respect, responsibility, integrity, servant leadership, and sportsmanship.

George Mason University's College of Education and Human Development (CEHD) includes two schools: the Graduate School of Education, one of the most comprehensive education schools in Virginia, and the School of Recreation, Health, and Tourism. CEHD offers a full range of courses, certificates, and degree programs on campus, online, and on site to more than 4,000 students each year. CEHD is fully accredited by NCATE and all licensure programs are approved by the Virginia Department of Education. George Mason University, located just outside of Washington, DC, is Virginia's largest public research university.