George Mason University student E’Yad Al’Taha will be celebrating two significant accomplishments this December: he will graduate with a Bachelor of Science in Kinesiology, and he will be the first graduate to complete the new minor in coaching.

Al’Taha is originally from the Al-Hasa region in Saudi Arabia, where he discovered his love for soccer at a very young age. When he moved to the United States at age 15 during his high school years, he continued to play soccer at Lake Braddock Secondary School and with the indoor soccer club, Team America. During summer 2010, Al’Taha joined the Al-Ettifaq Football Club (FC) training camp back in Saudi Arabia. Al-Ettifaq FC is a Saudi Arabian professional club and soccer team renowned as the first Saudi Arabian club to win an international championship.

Over the years, Al’Taha realized that, as much as he liked playing the game, he had developed a deep interest in coaching and team leadership as he transitioned to his college years. "I found that the leadership provided by successful coaches was even more important to success than the skills and talents of the athletes on the team," he explained. "I knew that a coaching role is where I could have the most impact and that this was the direction I wanted to go." 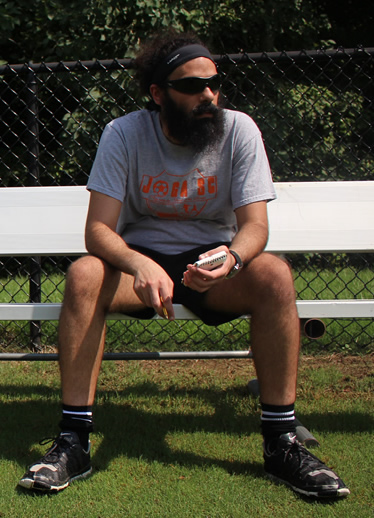 E’Yad Al’Taha, the first student to complete the Coaching Minor, is preparing for a career in international sports coaching.

As he entered the Kinesiology Program at George Mason, Al’Taha took his first class in coaching, SPMT 201 -Foundations of Sport Coaching with Craig Esherick, the former head basketball coach for Georgetown University and a regionally and nationally prominent sports commentator. "Studying with Professor Esherick strengthened my interest in the various philosophies and styles of coaching," Al’Taha explained about the class.

When the Coaching Minor was launched last year, Al’Taha was among the first students to sign up. He thoroughly enjoyed the courses but was especially pleased with the internship requirement. Under Esherick’s supervision, he earned and completed an internship with the Joga Soccer Club, a traveling soccer team of the National Capital Soccer League.

The internship was intense, with two-to-three trainings per week. "I served as an assistant coach, where I was responsible for evaluating the team to identify areas of opportunity for improvement and defining an approach to tackle them," he said, regarding the responsibilities of the assistant coach position. During the season, he traveled throughout the Mid-Atlantic Region with the team, learning more about professional sports coaching with each game over what became a very successful season. "We had a great season, including moving from Division 3 to Division 2," Al’Taha proudly shared about his time with the Joga Soccer Club, calling the internship “an overall great experience!"

"I have learned so much from the courses, faculty mentors—all of whom have tremendous resumes—and internship for the Coaching Minor, and especially from Professor Esherick," Al’Taha said. "I only wish there had been a Coaching Major!"

Esherick and the other faculty members teaching courses for the Coaching Minor have thoroughly enjoyed having Al’Taha in their classes. "It was clear from the first time I met E’Yad that his career goal was to work in the sports industry," Esherick recalled. "He is a serious student who wanted to learn as much as he could about our industry, especially the world of soccer.”

When Al’Taha finishes his degree this December, he plans on seeking a soccer coaching position in Europe or his home country of Saudi Arabia (he was recently offered an assistant coach position with Al-Ettifaq FC), and Esherick is confident he will be successful at doing so. When asked about Al’Taha’s career prospects, Esherick stated without hesitation, "It would not surprise me in the least to see him working for a top team in Europe very soon."