Alumnus Makes a Difference as Founder of Ellie's Hats 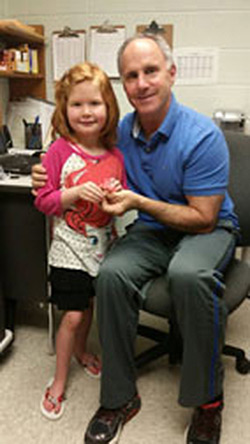 When Jay Coakley began collecting hats to give to cancer kids who lost their hair to chemotherapy, he expected the initial rush of donations to quickly slow.

Two years later, his charity, which by Coakley’s count has sent 10,000 hats across the country, to Europe and the Philippines, and also provides gift cards, iPads, crayons and toys to hospitals and clinics nationwide, is a phenomenon.

“It’s a snowball,” Coakley said, “that just keeps getting bigger and better.”

The nonprofit run on donations is called Ellie’s Hats because it began with Ellie Whitfield. Coakley, a two-time alumnus of the College of Education and Human Development at George Mason University (BSEd Physical Education ’78, MEd Leadership and Human Development ’94) met Ellie in fall 2013 in his kindergarten physical education class at Woodburn Elementary School in Fairfax, Va.

Ellie, with acute lymphoblastic leukemia, had lost her red hair to chemotherapy. “She was a pretty weak and frail kid,” Ellie’s mom, Jennica, recalled. “But she wanted to be at school.” 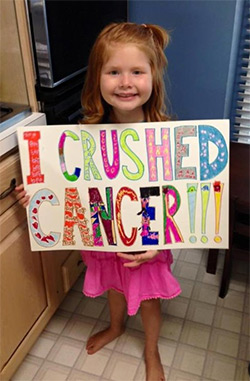 So for Christmas, Coakley began collecting hats for this spunky student, now 7, in second grade, and in remission after 2½ years of chemotherapy. Between word of mouth, friends and family, Coakley soon had almost 150 hats. After Ellie had her pick, Coakley distributed the rest to kids at the hospital where Ellie was being treated.

Things took off from there with social media as the main driver. Now, hat drives occur nationwide. George Mason University had one. So did the NHL’s Washington Capitals. Coakley said a group of knitters are making handmade crocheted hats to distribute.

Coakley and Ellie’s Hats also were part of the successful push to get Virginia to issue a pediatric cancer license plate.

“Our mission is to help the children and families that are in it right now,” Coakley said. “What has become just as important is raising awareness.”

Coakley has given Ellie about 100 hats, and she still wears them, though her hair has returned, Jennica said. A Scooby-Doo hat was always a favorite, as was a Princess Anna hat from the movie “Frozen.” Then there is the one with the red ponytail in the back that Ellie wore when she had no hair.

“This little girl,” Coakley said, “I just felt like I had to get her something to brighten her day.”

This article was written by Damian Cristodero and originally appeared on Mason News.