Back in 2014, Suh, who teaches mathematics education in the College of Education and Human Development (CEHD), and Seshaiyer, a math professor and associate dean in Mason’s College of Science, received a $1.35 million National Science Foundation (NSF) grant for a project geared at helping K-12 teachers show students the “why” behind math problems.

The pair, who also co-direct The Center for Outreach in Mathematics Professional Learning and Educational Technology (COMPLETE), a Mason center housed in CEHD that brings together Mason scholars and school district leaders and other experts, were just awarded an NSF continuation grant that will allow them to not only build on their previous research successes in math modeling education but to collaborate more broadly to investigate math modelling in terms of diversity and equity. 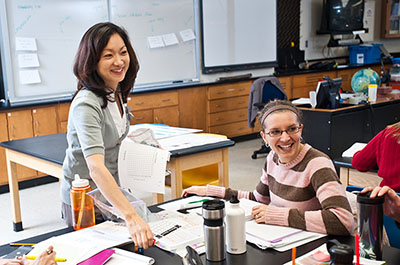 Math modeling is a way of describing a system by using mathematical concepts and language to better understand it.

“We’re excited to see how this equity-based professional development strategy works over different geographic and cultural contexts,” Suh said. “The researchers will be looking at Virginia, Arizona, Montana, and Washington. Those are very different geographic and demographic places. We’re really excited that we get to explore our research question with different teachers and different students from across the U.S.”

“The funding committee was attracted to the innovation, and what we were finding was the innovation was really working,” she said. “The second grant is going to show us how does this work, in what conditions, and for whom. We can really have a broader impact.”

The combining of Suh and Seshaiyer’s previous work known as IMMERSION (“Integrating Mathematical Modeling Experiential Learning and Research through a Sustainable Infrastructure and an Online Network”) with a once-separate, equity-based modeling project with researchers out West was a natural marriage. For the researchers, it is important to give broader applicability to the study. 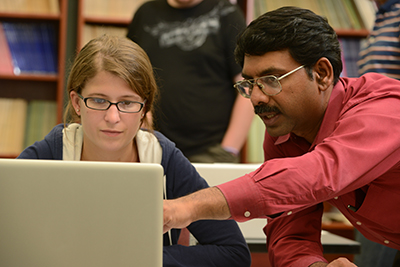 The new grant, titled “Advancing Equity and Strengthening Teaching with Elementary Mathematical Modeling” is a teacher design project focused on strengthening K-5 teaching with mathematics modeling. Suh, Seshaiyer, and others will design and research the impact of a blended project design program on teacher practice.

“Both of the project time frames for the original projects were coming to an end. We compared notes with them and noticed that the other researchers were looking at projects from a cultural aspect, linguistic diversity aspect, and diverse children-serving aspect,” Seshaiyer said. “This new project is about taking two very successful projects, sharing best practices, and creating a common framework that will help produce rigorous research in mathematical modeling, reading, and learning. Each of these groups will lead their own pieces of the project, but the ultimate goal will be something that is common to all of us.”

In addition to directly helping 112 educators in the research areas teach math modeling effectively and more confidently to roughly 2,800 students, the new iteration of the project will also produce online modules to be a resource to aid teachers and students anywhere in the world.

“It’s important to learn how to use mathematical modeling to solve real-world problems, for example addressing the United Nations Sustainable Development Goals 2030,” said Seshaiyer. “It will help to not only improve student learning but also help to enhance the pedagogical practices of teachers.”

Suh said that the general public, as well as teachers and school administrators, seems very interested in math modeling of late, given what’s been going on in the world with the coronavirus pandemic.

“Math modelling is so prevalent in the news right now as we’re all looking at data and modelling to make sense of the world,” Suh said. “All of the data that we see across the news channels, that’s data being modeled. We’re really looking to see how to make decisions, like when to open schools [following pandemic closures]. Math modeling is really important, and we’re interested in how teachers can use math modeling to get students to be quantitative thinkers. We’re also pulling data from the students’ communities and the immediate world.”

Suh also mentioned how students can show a capacity and interest for this type of learning at a young age with an example of how first graders in their earlier research project were given the problem to solve of why they kept running out of markers as a class. The students took stock of how many markers they had, did inventory of how many they use in a month, and then put the data to use.

“They were using a descriptive model and predictive model to solve a real problem,” Suh said. “At the end they found out that they were definitely going to run out. They wrote a letter with their teacher to the principal and the principal funded them. They saw how powerful math was to solve a problem they were having in the classroom.”

“It’s natural to bring new topics into this project,” he said. “Giving mental stress is the last thing you want, but you can bring in the topic carefully. You can also use math modeling to show students concepts with real-world data on other things like poverty, hunger, and clean water sanitation.”

Like Suh, Seshaiyer said he’s looking forward to continuing to share his passion for math modeling and collaborate with researchers and teachers around the country.