Sarah Miron’s perseverance and time as a student at Mason each played a big role in her recently landing a new full-time job in the Alaska wilderness with the United States Forest Service.

Soon, she’ll be stationed year-round in Juneau for a 3- to 6-year assignment as part of a two-person law enforcement team patrolling a vast swath of forestland at Tongass National Forest, which includes islands, the 12-mile Mendenhall Glacier, and 11,000 miles of shoreline. 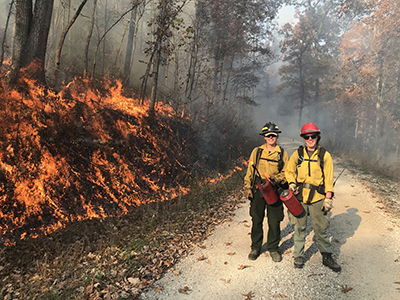 Tongass is the largest national forest in the country and covers most of southeast Alaska.

For such a job, it generally takes several steps to get there. For Miron, a 25-year-old 2018 grad, the steps included previous full-time seasonal stints working with the U.S. Forest Service in Alaska and also time participating in prescribed burns as a firefighter with the U.S. Forest Service in Kentucky. Many of the early steps to get Miron ready, though, were taken while still studying Health, Fitness, and Recreation Resources with a concentration in Parks and Recreation Management for her bachelor of science degree at Mason.

Fate also played a role of setting her on her nontraditional path, she said.

“I was planning to go to a military college after high school, but I got a concussion that meant I was medically unable to go that route,” Miron said. “I didn’t really know what I was going to do.”

After the concussion (a painful freak accident where she was hit in the head by a shot put while participating in track and field) that forced her to change her plans, Miron took a year off between high school and college, doing farm work and spending a lot of time hiking locally in Virginia.

“I realized I loved parks and rec and working outside and decided to make that my major,” said Miron, whose father, Michael, received both his bachelor’s and master’s degrees from Mason in international studies and international transactions, respectively.

Miron decided she could find a way to serve others while being able to enjoy the natural world for her career.

Once at Mason and working on her major, the Northern Virginia native, who’d never visited Alaska, began taking the first steps toward an eventual career in parks. She worked as a ranger for NOVA Parks in Virginia for her practicum and completed a wilderness ranger internship in Alaska with the U.S. Forest Service to fulfill requirements for her Mason bachelor’s degree. She credits Mason professors for fostering her interest in various aspects of the field.

“Throughout her 400-hour work experience in Alaska, Sarah’s weekly report assessments for her internship were fascinating,” said Mason Recreation Management Professor Brenda Wiggins. “Sarah would explain the terrain and send back beautiful pictures, too. When the internship was over her site supervisor in Alaska asked her to stay beyond her contract, and she did. I’m always excited to learn where Sarah’s adventures are going to take her.” 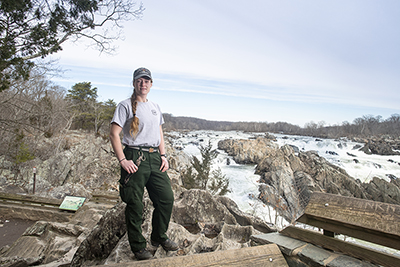 Miron also possessed other qualities that made her stand out for nationally competitive jobs. For instance, she could confidently handle firearms since she started as a competitive shooter at age 11. It turned out, that would come in handy.

The last two summers, Miron’s work with the Forest Service included serving as a bear protection officer in Alaska. She was the first Student Conservation Association intern to carry a firearm in the field and complete the federal firearms training program with the U.S. Forest Service in the Tongass National Forest.

“One time, we had five brown bears approach us in a 24-hour period after we got dropped off at the trailhead to do visitor use monitoring,” Miron said. “They were curious bears, so they kept coming closer to us, so for safety I ended up having to shoot at a tree and that scared them off.”

Serving as a firefighter through fire season at Kentucky’s Daniel Boone National Forest, on a different assignment with the Forest Service, Miron said she gained an appreciation for the natural role of fire in an environment and also rarely noticed that she was the only woman serving on the fire line.

“It’s really not a big deal being the only woman in a crew full of men because everybody’s there to do the same job and putting in the same amount of effort,” she said. “I figure if I can hold my own, no one cares to notice. I loved every minute of it. You haven’t experienced teamwork unless you’ve been on the line with something like 10 other guys or girls.”

Miron also noted that it’s been tough recently as someone who has worked in firefighting to see images and footage of recent fires in Australia and know what the firefighters and many others there must be going through. “The immense suffering of people down there and not being able to help, it’s painful,” she said. “Everybody’s doing their part

in some way, even if it’s not right next to the fire, on the line.”

In Alaska, meanwhile, Miron said she’s seen snow even in July and other dramatic shifts in weather.

Before going off to Alaska this time, she will undergo FLETC (Federal Law Enforcement Training Centers) training this spring at the federal facility in Glynco, Georgia for 17 weeks before doing an additional 12 weeks of field training to prepare for her new assignment. Miron said she knows exactly what to expect because she completed a project on FLETC training while a student at Mason.

After spending parts of the past two years at Tongass, Miron said she’s looking forward to getting back there in her new role.

“One day I could be writing tickets down at the campground because people are speeding, and then the next, I could be up on the glacier doing rescue work if a hiker needs help,” she said.

“This kind of opportunity doesn’t come around very often. Every job I’ve had has been going toward this position. It can be hard, but it’s freeing, too, to go work in an amazing place that you never thought you’d be able to see.”