College of Education and Human Development (CEHD) graduate Danielle Moore needed to do to reach the NBA was work on a mid-range jumper or improve at shooting free throws."> 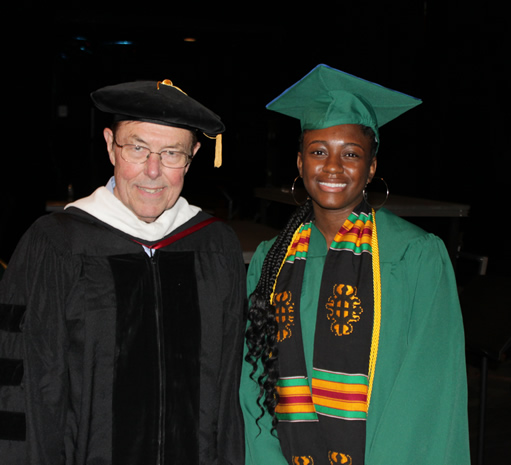 In some ways, it would be a lot simpler if all that recent College of Education and Human Development (CEHD) graduate Danielle Moore needed to do to reach the NBA was work on a mid-range jumper or improve at shooting free throws.

Instead, the 22-year-old is juggling an always busy schedule while reading math books on the side to get a leg up in the highly competitive field of basketball operations. She said that hard work is a habit she picked up at Mason.

Moore transferred to George Mason after her freshman year of college to be closer to both home and Washington, D.C. She quickly found a home in CEHD’s Sport Management program and then added a data analytics minor. The decision turned out to be life changing, she said.

“At Mason, they have a bunch of opportunities to connect with Mason graduates,” said Moore. “The Sport Management program holds its own job fair, and you can talk to pro teams and different sports agencies, anything in the D.C. area. The avenues you can take are pretty unlimited because of all the sports organizations in D.C.”

During her junior year, Moore recalled needing to leave her house in Lorton before 7 a.m. each day to ensure she could arrive at her internship in Washington, D.C. by 10 a.m.

She didn’t have a car at the time and would have to take the Metro into the city and then catch an Uber to get to the District of Columbia State Athletic Association (DCSAA) offices, where she worked. At one point, she was taking 18 credits worth of classes to complete her bachelor’s degree in health, fitness, and recreation resources (with a concentration in sport management) while balancing both her D.C. internship and her job on campus in Mason’s athletic department.

All of Moore’s effort was rewarded during May’s graduation ceremonies as she received the Charley Casserly Outstanding Student in Sport Management award, named for the former NFL general manager of the Washington Redskins and Houston Texans who now serves as executive-in residence at Mason.

“I would tell younger students, ‘Don’t be afraid to take an internship that requires you to travel a lot, and don’t pick an internship just because it’s the easiest route to go,’” said Moore, who hopes to land a season-long internship with an NBA team this fall.

Much like Casserly once worked his own way up the ranks, going from high school and college positions to eventually wind up as an NFL executive, Moore is working hard to set herself apart from the pack.

In July, Moore will spend time in Las Vegas at Sports Business Classroom, a program that’s become a launching pad for those looking to break into basketball. The program is run by Larry Coon, a computer scientist who is a national expert on the salary cap and the NBA’s collective bargaining agreement.

“It’s set up like a short college program,” Moore said. “You pick a major [Moore’s is Salary Cap], and you take a bunch of classes. You end up getting to interact with people who are in the NBA—coaches and executives.”

The classes for the program are held at the University of Nevada-Las Vegas (UNLV) at the same time as the NBA Summer League, which also takes place on UNLV’s campus.

In the meantime, Moore continues in the job she held as a student working as a Field House supervisor at Mason’s athletic complex until she makes her next move.

She’s also taking advanced math courses as she feels out her next steps in the classroom. She’s planning to enroll in a master’s program either in sport management or data analytics in the fall of 2020 as she continues to pursue a career in the sports industry with an eye on pro basketball.

Moore has already gotten a hands-on taste of basketball operations. She served as a basketball operations intern for American University’s women’s basketball team this past season. There, she travelled with the team, took statistics at practices, and helped with compliance. For a special project, she completed a detailed scouting report of the team for the coaching staff.

“I did pretty much anything they needed help with,” Moore said.

But the moment everything truly clicked for her was while she was looking at NBA job ads during that busy junior year. She was taking an introductory statistics course at the time and remembers thinking how the job descriptions matched exactly what she was now able to do with analytics. “That’s the moment when I said, ‘OK, this is what I want.’” Then, she really got to work.

Now she hopes to make her way to the next level.