The coronavirus pandemic very nearly cost Brooke Lindsley a shot at her first job out of college.

While the pandemic has caused a major shakeup in Lindsley’s field, some recent good news not only kept her career on track, but on the heels of earning her bachelor’s degree in tourism and events management (TEM) in May from George Mason’s College of Education and Human Development, it also gave her renewed confidence in her industry’s ability to adapt.

“I think that there’ll still be a need for event planners even in virtual, hybrid, or reduced-capacity situations because there are so many big and little parts to planning conferences,” said Lindsley, a 24-year-old from Virginia Beach who now works full time for Conference Managers, an event planning firm in Herndon. “It takes a team to do this work, especially since a conference can be hundreds or thousands of people.”

Lindsley is especially grateful to be a part of her work team, despite the recent economic downturn.

In January, she had started a 400-hour senior internship, also at Conference Managers, going into work each day Monday through Friday, at least in the beginning. 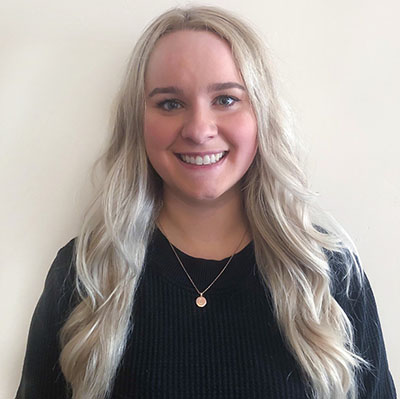 Things went very well for her early on at Conference Managers, which specializes in putting on association and government conferences, trade shows, and events. They went so well, in fact, that she was told in late February that the company was very pleased with her work and was hoping to bring her on full time once she graduated.

“The internship gave me a sense of working a full-time job. And I discovered I loved this kind of work,” Lindsley said. “I got to work on the logistics side and got to work on projects related to speakers, helping them register for the conferences. I did housing, venue details. I was working on a special project where I developed a handbook for an association’s employees.”

Then came the pandemic and some big changes. In addition, her special project couldn’t be used because the event she designed it for needed to be called off.

“Within a few weeks, once the pandemic started getting worse, I found out that my internship would need to be cut short due to everything going on,” Lindsley said. “I finished my hours from home by early April and turned everything in.”

Like many people in the current economy, she also needed to keep looking for jobs since it looked like the full-time offer she was hoping for might not come.

“I spent a month job searching as [were] a lot of people in this industry with everything changing with events canceling or going virtual, and hiring freezes,” Lindsley said. “I wasn’t really sure if I would be able to get back in the industry where I had interned.”

Then, one day in May when she didn’t expect it, Lindsley received a call from her internship supervisor at Conference Managers.

“I was in shock getting the call because it’s a pretty stressful time to look for a job or to even get an interview,” she said. “My supervisor mentioned on the call that a position had suddenly opened up and she was asking if I would come back and work for them full time.

“It was just the biggest relief to get a call from her because I loved the company and felt like it was where I wanted to be post-graduation.”

Earlier while at Mason, she had thought she wanted to venture into wedding planning, but her practicum and internship experiences had encouraged her to explore events more broadly, which she said was a big positive.

As a full-time office and customer support assistant now at Conference Managers, Lindsley is helping on projects with logistics and registration and building on what she learned in her internship.

She likes the job, she said, and has found ways to be helpful during this period of industry transition.

“Most of the associations that we work with canceled their in-person events for the rest of this year, so most of them plan to resume next year, and others for this year transitioned to virtual events,” Lindsley said. “That’s where we come in and use the different programs that we use to reshape the conference into a virtual conference.”

Lindsley said she wouldn’t have imagined that event planning would be this heavy in virtual programming so early in her career. She’s figuring things out just like the company’s more seasoned pros.

“For next year, we’re starting to plan different ways to keep all of the attendees safe,” Lindsley said. “Some events further into next year could be fine, but we’re also trying to plan what will happen with different contingency plans, especially scenarios [that consider] if international attendees can’t come... We’re also looking at what our floor plans for social distancing might need to be. I think technology will just be more prominent going forward, and more companies will want to try to implement hybrid or virtual meetings.”

Tina Jones, an instructor and the fieldwork coordinator for Mason’s TEM program, said she couldn’t be happier that Lindsley was able to land a full-time job in her field at a forward-thinking company.

Lindsley, Jones said, has the right traits to stand out in a competitive field like event planning.

“I was extremely proud of her because she showed such resilience and adaptability in a time of so much uncertainty when her internship suddenly changed,” Jones said. “She stayed so positive even though she had to shift her entire internship and miss out on implementing live events. She is extremely capable and very deserving of this opportunity.”