This spring break, one George Mason class was able to experience a different culture—while learning about how that culture used assistive technology (AT) in schools and everyday life.

From March 9-16, Yoosun Chung, an associate professor at Mason, and nine of her students went to South Korea as part of the “Exploring Assistive Technology in Korea” program. The students who went on the trip were either taking Chung’s EDAT 521 (Augmentative Communication) class or had taken it in a previous semester. 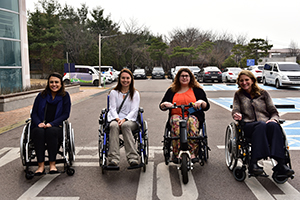 The purpose of the program was twofold: to gain an understanding of cultural differences toward individuals with disabilities and to learn about Korean culture, food, and history.

“Interestingly enough, all of us felt that we immediately clicked with each other,” Chung said.

Chung and her students had ample time to get to know each other, too, as the group set out on a tour of Korean culture. At the Gyeongbokgung Palace they watched the changing of the guard, with the guards dressed in traditional Korean Hanbok. They tried out traditional meals during a food tour and also explored on their own.

The group visited EWHA University in Seoul and sat in on an undergraduate class in special education. The students presented on AT in the United States, and their counterparts presented on AT in Korea. At one point, remembers Mason student Roba Hrisseh, the group had a discussion on sign language for individuals with different levels of disabilities, comparing American Sign Language with Korean Sign Language. 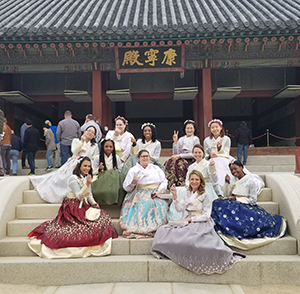 “It was inspiring and encouraging,” Hrisseh said of the trip, “and maybe one day when I open a special needs school in the U.S., I could implement some of those strategies that they were using as well.”

The group also spent time at an assistive technology center where students were able to have hands-on experiences with various AT devices. For many of the Mason students, the tour of the center was eye-opening, including graduate student Laura Hoffman who has helped evaluate clients’ needs in regards to positioning in wheelchairs.

“I saw many products that were incredibly useful that I had never seen before,” Hoffman said.

One of the hands-on experiences was test-driving wheelchairs. A group that had been strangers from an online class just days before were suddenly learning the steering, seating, and motor power of different wheelchairs while racing around the parking lot.

“You should have been there to witness (Professor Chung),” Hrisseh said. “She was zooming around in the parking lot on those wheelchairs!”

The wheelchair testing was a highlight of an experience that was equal parts fun and educational. As the group got a sense of how South Korea approaches assistive technology, it also got a sense of how the country treats those with disabilities.

“Fortunately, people who work in the AT and special education fields in Korea have already realized that individuals with disabilities have lots of potential abilities, and the quality of their lives can be tremendously increased when they utilize appropriate AT devices for them,” Chung said. 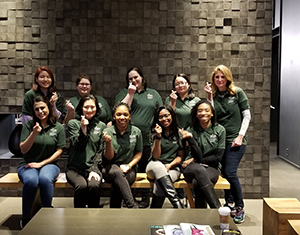 Chung is planning to lead the trip again for at least the next two years, providing interested students an opportunity to see how “passionate and dedicated” their counterparts in South Korea are and to immerse themselves in a different country and culture.

According to the students who went on the trip this year, it’s a great opportunity.

“The trip far exceeded any hopes and expectations that I may have had,” Hoffman says. “Even though I have been in the field for quite some time, I learned so much while on this trip—so much so, that I could not have possibly absorbed it all. Even if I returned and participated in the exact same schedule, I am certain that I would learn so much more. I am still trying to recall and absorb everything to which we were exposed.”