Katherine Leon knew relatively early in her time at George Mason that she had an interest in mental health and helping people.

Then an eye-opening course on relationship health she took as a sophomore elective caused her to change her major from health administration to human development and family science (HDFS) in the College of Education and Human Development. 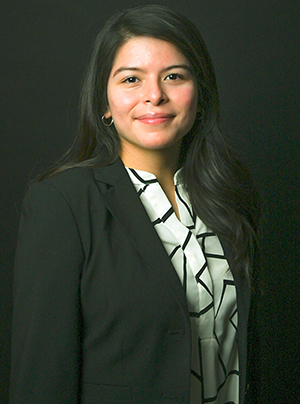 Her dedication for helping others—partly inspired by her time at Mason—and an internship with the National Alliance on Mental Illness (NAMI) wound up leading Leon to a full-time job with the organization upon graduating last spring with her bachelor’s degree in human development and family science.

“I think what helped me get the job was really the HDFS internship course and not only the internship by itself,” said Leon, a native of Woodbridge. “Because I couldn’t just do the basics of whatever I was assigned. I also had to complete coursework to get a good grade in the class. I think that made me stand out.

After the internship and while still completing her bachelor’s degree at Mason, the organization kept her on with a temporary position for four months in 2019.

“I was sad to leave after the temporary position, but I knew if it was meant to be I’d eventually get a job here again,” Leon said.

Quickly, NAMI—the nation’s largest grassroots mental health organization that helps individuals and families affected by mental illness—reached back out and offered her consulting work in January 2020. That evolved into a part-time job until she was finished with school, and eventually she earned a full-time senior coordinator job at NAMI’s national office in Arlington, which began last May.

Not an easy job

The work Leon and her colleagues accomplish at NAMI is certainly not easy, but Leon said it can be very fulfilling.

Since starting full time at NAMI, Leon has recently transitioned to a human resources role. She still fields phone calls from the public in Spanish since she’s one of just two workers in the national office right now who is bilingual.

“Being able to help people in Spanish is really rewarding,” Leon said. “Many callers don’t know where to start, and to be able to deal with these complex issues in their language, they’re relieved.”

Whatever the language, calls on the helpline can be stressful at times, Leon said. “We get calls regarding criminal justice issues—like a loved one was just incarcerated. Or a loved one is refusing treatment and won’t acknowledge they have a mental health condition. We’re like a compass. We don’t offer treatment, but we can help.”

In her new role, Leon is finding volunteers and interns who are well suited to take sometimes stressful calls and be there as empathetic, active listeners. Leon screens applications, sets up interviews, and, if candidates are offered the job, oversees their job onboarding and facilitates their training.

“We look for people who have a personal connection to the work,” Leon said. “It can be draining work sometimes on the phone for the 4-hour phone shifts, so we need people who have compassion and empathy.”

Things are busy right now at NAMI, which is both good news and bad news, Leon said. It’s good, she said, that more people are learning about their resources and getting help, even though the COVID-19 pandemic is a big factor in the increase of demand, too.

Web traffic at NAMI’s website increased by more than 100 percent from 2019 to 2020, Leon said. The office recently increased its phone hours and is working on new chat and text options to help more people.

“We’re getting more calls about anxiety and depression,” Leon said. “But the good news is knowing what we’re doing to try and reach so many new people and help them. We’re trying to help make sure people don’t feel alone.”