Mason researchers Anya Evmenova and Kelley Regan are in the second year of a five-year $2.2 million grant to develop a writing application for middle school students.

This article originally appeared on Mason News and was written by Colleen Kearney Rich.

Kids say — and do — the darnedest things, which Mason researchers Anya Evmenova and Kelley Regan have been learning as they test a computer-based writing tool they are developing for middle school students with high-incidence disabilities. 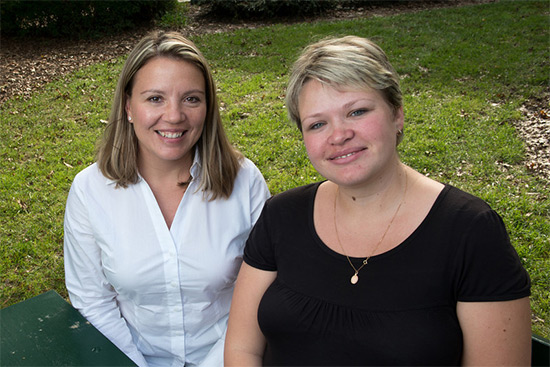 Kelley Regan and Anya Evmenova received an award in the amount of $450,595 from the U.S. Department of Evmenova and Regan received a $2.2 million from the U.S. Department of Education titled “Project WeGotIT!: Writing Effectively With Graphic Organizers—Teachers Integrating Technology.” Photo by Evan Cantwell/Creative Services/George Mason University.

The two College of Education and Human Development professors are in the second year of a five-year $2.2 million grant from the U.S. Department of Education. Their project is called WeGotIT!, which is an acronym for Writing Efficiently with Graphic Organizers: Teachers Implementing Technology.

The computer-based graphic organizer their team is developing is a Microsoft Word interface with embedded self-regulation strategies to help middle school students write essays on the computer. While the organizer is designed to meet the needs of students with high-incidence disabilities, including learning and emotional and behavioral disorders, the embedded prompts and supports can really help any student write an essay. 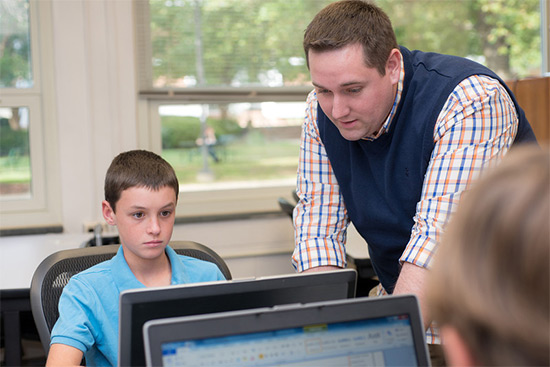 The researchers started their prototype with strategies for writing persuasive essays, but the comprehensive plan is to also include expository and narrative essays. And this is something that the schools need. For example, in Virginia, the eighth-grade writing Standards of Learning (SOL) test is computer-based. Evmenova and Regan believe that by starting the students with the graphic organizer in sixth grade, the students will have mastered essay writing on a computer when the time comes to take the SOL.

“The focus is on self-regulation, with the plan for the teachers to eventually phase [the organizer] out,” says Evmenova.

The self-regulation and self-monitoring strategies embedded in the prototype include help with setting a goal, a self-monitoring checklist, reminders about what a certain part of the essay is supposed to include and links to visual examples. Other self-regulation strategies embedded in the computer-based graphic organizer include self-instruction, self-motivation, self-evaluation, self-satisfaction, attribution and self-efficacy. 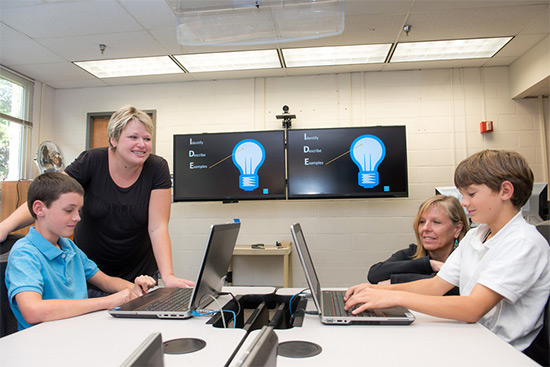 By incorporating the strategies, the duo hopes to cut down on the instructional time for the teachers. In addition, they hope that with practice, students will be ready to write proficient essays more quickly on the computer. Specifically, the project intends to impact teacher practice (e.g., teacher attitudes, quality of delivery, effective use of technology, etc.) and student learning outcomes (e.g., writing quality, length of writing, student attitudes, etc.).

This past summer and early fall, Evmenova and Regan — with the help of their graduate students — tested their new prototype and the accompanying lesson plans on a few members of the target audience. The sessions were videotaped and served as a learning experience for everyone involved.

“You might think it is the best lesson plan in the world, but then you put a kid in front of the computer and they go ‘what?’” says Evmenova. “Well, you still have a lot of work to do.”

“When it bombed, we knew it,” says Regan, laughing. 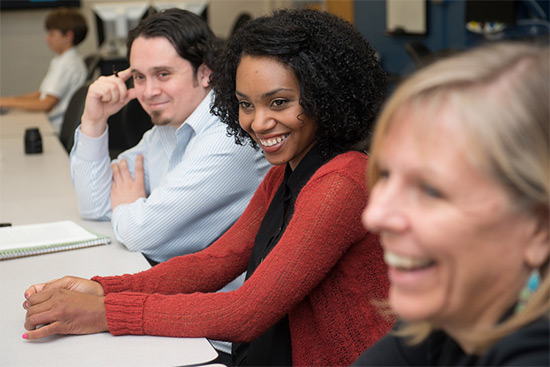 They immediately began tweaking the prototype and rewriting the lesson plans that go with it. “We are so glad we did [the testing]. Both the graphic organizer and the lesson plans have changed dramatically,” says Evmenova.

A formal pilot program for their prototype was conducted in late fall 2013 and included teachers and students in one school in a local school district. By year five, they plan to roll out the graphic organizer to 1,200 students and 60 teachers in 17 schools across five public school systems: Arlington County; Alexandria City; Fairfax County; Loudoun County; and Washington, D.C. They will collect data on the writing performance of students with and without high-incidence disabilities in inclusive classrooms, as well as gather teachers’ technology implementation data.

“We are taking a learner-centered approach to this project,” says Regan. “Our goal is to work collaboratively with teachers and to be responsive to what is happening in schools and what teachers find feasible and practical. Hopefully, in turn, the teachers will be learner-centered in their delivery [of the graphic organizer].” 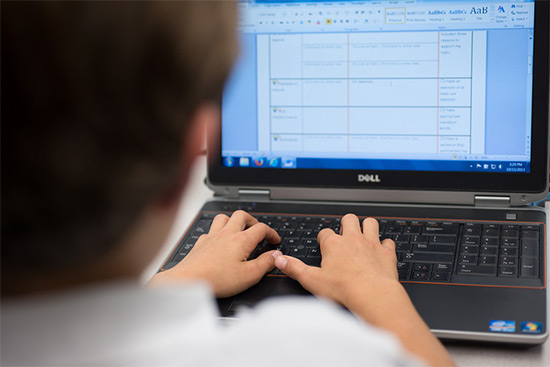 The prototype embeds self-regulation and self-monitoring strategies including help with setting a goal, a self-monitoring checklist, reminders about what a certain part of the essay is supposed to include, and links to visual examples. Photo by Evan Cantwell/Creative Services/George Mason University.

As a part of the project, the pair completed a needs assessment to understand how middle school teachers support students with writing instruction specifically. They needed to determine the types of problems teachers observe in the classroom, what kind of technology teachers use in their classrooms and why teachers would or wouldn’t use technology. Their survey was disseminated to the targeted school systems and nationally.

“What we are seeing so far is that the national responses are similar to the local responses,” says Evmenova. “Even within our five schools, we were very surprised to see that Fairfax, one of the top school systems in the country, and DC Public Schools have some of the same issues with access to technology.”

Access to computers and software is one of the issues that encouraged them to create their prototype in Microsoft Word. They didn’t want the user to need special software to access the organizer. Typically, students can access Microsoft Word at school and at home. 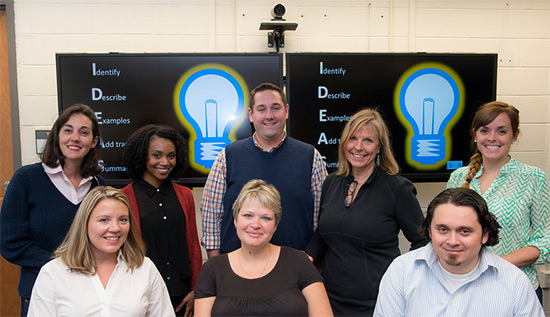 Project WeGotIT! was one of seven projects funded by the Department of Education (Office of Special Education Programs) in 2012. As a part of the grant program, Evmenova and Regan are in a cohort with other researchers across the nation whose projects also received support. As a result, they get to compare notes with colleagues from around the country on monthly conference calls.

Although everyone in the cohort is doing something different, in many ways the process is still the same, says Evmenova. “It has been a very engaging, beneficial and rewarding learning experience.”