"We are the future of the rest of our planet," says second grader Juliet. With great seriousness and impressive facts, she and her fellow 7 and 8-year-olds go on to describe how a warming planet is affecting squirrels, snakes, bats, and penguins. 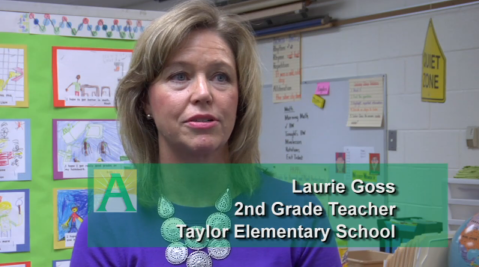 
Mrs. Goss challenged her class with the following problem: How can we protect plants and animals in their habitats from the effects of climate change? The results of their inquiry are featured in a short video from Arlington Public Schools.

In describing their projects, the students talk with ease about fossil fuels, threats, the food cycle, extinction, habitats, and collaboration, expressing a level of understanding for a complex issue that is amazing to see.

"From that, I have a level of excitement about science in my classroom that I've never had," said Goss. "My kids every day are telling me how much they love science. And so many of them now are looking forward to a career that involves science. It's been a really thrilling experience."

Acting as a catalyst for classroom teachers like Laurie Goss is what VISTA is all about. The project, now completing its second year, aims to increase elementary and secondary student performance in science using innovative problem-based learning techniques and inquiry-based teaching methods that pilot studies have shown to be successful.

The Virginia Initiative for Science Teaching and Achievement (VISTA) is a statewide partnership among 60+ Virginia school districts, six Virginia universities, and the Virginia Department of Education. Its goal is to translate research-based best teaching practices into improved science teaching and student learning for all students at all levels. VISTA is funded by a five-year, $34 million grant from the U.S. Department of Education through the Investing in Innovation (i3) program, which includes a $5.7 million private sector matching requirement. To learn more, visit http://vista.gmu.edu.