Depending on 18- to 22-year-olds to follow through and practice self-discipline can be a scary thought for a coach, especially when they’re thousands of miles away. But as the strength and conditioning coach for the University of Alabama men’s basketball team, Snowden could only hope his squad stayed fit from a distance after the pandemic ended last season prematurely and sent everyone home for the next three months.

“You’re relying on them to execute and you pray that they do so they are not setting themselves up for injury right away,” he said.

If anything, the importance of Snowden’s job was magnified. Despite being remote, the George Mason alum stayed in “constant contact” with the Alabama players, according to head coach Nate Oats. Snowden designed workouts and individual programs for each player, some as far away as California. 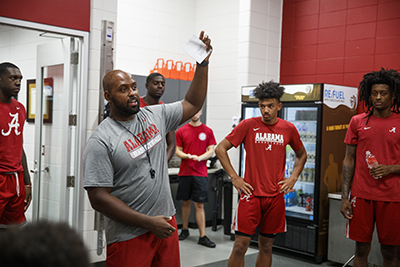 “I think he did a good job staying on them,” Oats said. “When we got back in June, I felt our guys were in pretty good shape for supposedly not having access to much over the last three months.”

Alabama is reaping the rewards for the hard work put in during an unusual offseason. The Crimson Tide open the Southeastern Conference Tournament on Friday in Nashville as the No. 1 seed after winning their first conference regular-season title since 2002 and are a lock to make just their third NCAA Tournament appearance in the last 15 years.

“It’s been fun to watch—even the way guys approach training,” Snowden said. “Being able to watch them win some games, smile for once and build some confidence has been really cool. I think it’s tough for a program that hasn’t had much success in the last 10 years. It’s good to see those guys have their moment.”

Snowden, who received his bachelor’s degree in kinesiology from Mason in 2015, took a circuitous path to reach this point in his career.

A two-sport athlete in wrestling and lacrosse, Snowden said he was not ready to go to college after he graduated from Linganore High School in his hometown of Frederick, Md. So he enlisted in the Navy, spending the next four years as an armorer on the USS George Washington.

“Honestly, it’s probably one of the best decisions I’ve ever made,” he said.

While out in the middle of the ocean and on his way to places such as Brazil, Chile, South Korea and Japan, Snowden served as a command fitness leader, preparing and training sailors for the bi-annual fitness test. Through that role, he met the fitness director, who happened to train a rugby team in Japan. 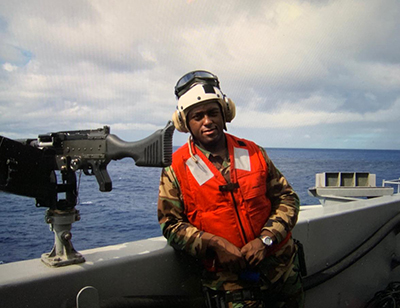 Snowden served in the Navy aboard the USS George
Washington.

“I went to go watch her and was like ‘Oh, this is what I want to do,’” Snowden said.

Before switching careers, however, he was offered a position he couldn’t pass up—serving on Marine Helicopter Squadron One (HMX-1) for President Obama. He spent three years working in the supply department, often traveling a week ahead of the president to ensure that HMX-1 had the proper parts and the helicopters were mechanically sound. In 2012, he was awarded the Presidential Service Badge and met the president in the Oval Office.

“Everyone always makes it sound like I was hanging out in helicopters with President Obama,” Snowden said, laughing. “It wasn’t like that [but it was] a great opportunity.”

His time in the military paid dividends for his career—quite literally. His GI Bill covered almost his entire undergraduate and graduate studies.

Kinesiology and Sport Management Professor Margaret Jones remembers Snowden as an engaged and passionate student who “knew what he wanted coming in.”

“I don’t know if it was having done military service or being older or a combination—he was really kind of laser focused,” Jones said. “As a result, in class he participated at a level that was above and beyond. He was just the kind of student that was fun to have because when you’re teaching something that you’re passionate about there is nothing better than having a student having that same passion for it. It just makes your day. I loved having him in class.”

Thanks to expert faculty, such as Jones and Kinesiology Associate Professor Joel Martin, along with exposure to the Sports Medicine Assessment Research and Testing (SMART) Laboratory, Snowden said he was more than prepared to excel professionally. In addition, he gained valuable hands-on experience through internships with the University of Maryland football team and with Strength and Performance Training, founded by Sarah Walls, a strength and conditioning coach for the Washington Wizards and Mystics. 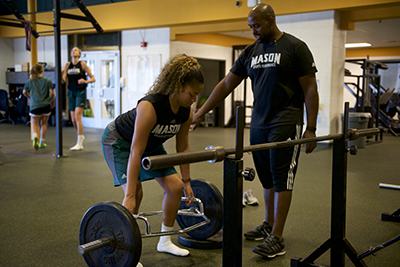 Snowden worked as a strength and conditioning
coach at Mason in 2016-17.

“Going to George Mason blew the doors open for me,” said Snowden, who will marry Mason alumna Colleen Wevodau (MBA ’10) this summer. “Super grateful for that experience. As far as getting into this field and who I got to meet—both in the private sector and the college sector—that was huge. The equipment you get to put your hands on as a student just sets you up to do so much more when you get into the field, no matter which field that is, really.”

Opportunities quickly came for Snowden, who served as a graduate assistant for the VCU men’s basketball team while he earned his master’s degree in sport leadership. He returned to Mason as the strength and conditioning coach of the women’s basketball, volleyball and lacrosse programs. Just a year later, he was hired onto Oats’ staff at the University of Buffalo and was one of Oats’ first hires when he took over at Alabama in 2019.

“I think he is a huge addition to our program,” Oats said. “He’s got a way about him. He’s no nonsense but he can relate to the guys. He’s fully involved. If you watch him on the sidelines during the game, he’s probably more fired up than I am with some of the calls [by the officials]. You can tell he is super invested in what we’ve got going.”