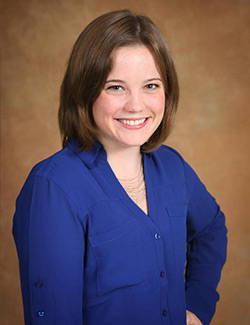 Stephanie Chlebus, a graduate of George Mason University's College of Education and Human Development, was recently honored with a 2012 Presidential Award for Excellence in Mathematics and Science Teaching.

“These teachers are inspiring today’s young students to become the next generation of American scientists, mathematicians, and innovators,” President Obama said. “Through their passion and dedication, and by sharing their excitement about science, technology, engineering, and math, they are helping us build a promising future for all our children.”

The Presidential Awards for Excellence in Mathematics and Science Teaching are the highest honors bestowed by the United States government specifically for K-12 mathematics and science (including computer science) teaching. Established by Congress in 1983, the awards are administered by the National Science Foundation on behalf of The White House Office of Science and Technology Policy. Winners of this Presidential honor receive a $10,000 award from NSF to be used at their discretion.

"Receiving the Presidential Award would serve as validation of the efforts I have put into teaching mathematics, as well as a chance to express my gratitude to those who have helped me become the teacher I am today," said Stephanie Chlebus as part of her nomination. "It would present a chance to thank my colleagues, past and current teachers, and my sister and mother (both mathematics teachers) for contributing to my development. No one succeeds on their own, and all of these teachers have helped me grow and develop my love, passion, and skills."