RHT Alumna Celebrates With the Blackhawks

What's that that Noelle Fanella is hoisting over her head? Why, it's the Stanley Cup!

Noelle, a recent alumna of George Mason University, landed a full-time job as a business data analyst working at the United Center with the Chicago Bulls and Chicago Blackhawks.

After graduating from George Mason, the former volleyball player and economics major parlayed her minor in sport management (and formidable networking skills) into several sports related internships and jobs. Her training at Mason, Fanella says, prepared her to work at mega sports events.

Esherick, assistant professor in the School of Recreation, Health, and Tourism, isn’t surprised. “She understands the sports industry,” he says. “She has a serious interest in working in the industry and I think that comes through.” 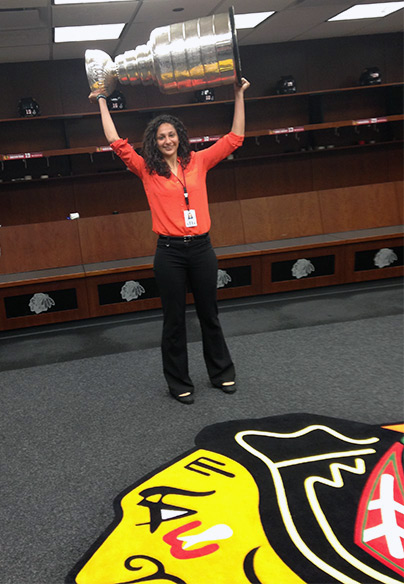 Noelle Fanella with the Stanley Cup.

George Mason University's College of Education and Human Development (CEHD) includes two schools, the Graduate School of Education, one of the largest in Virginia, and the School of Recreation, Health, and Tourism. CEHD offers a comprehensive range of degrees, courses, licensures, and professional development programs on campus, online, and on site. The college is distinguished by faculty who encourage new ways of thinking and pioneering research supported by more than $75 million in funding over the past five years.