“We felt driven to do something,” said Mark R. Ginsberg, dean of the College of Education and Human Development (CEHD) at George Mason University. “Particularly after the Sandy Hook tragedy, we wanted to contribute to this issue as a university.”

Drawing upon its expertise in the area of counseling, George Mason convened a “Dialog and Symposium on School Safety and School Violence” at the Fairfax campus on June 11, 2013. The symposium was hosted by Dean Ginsberg, in collaboration with Professors Fred Bemak and Rita Chi-Ying Chung of the Counseling and Development academic program, and the Diversity Research and Action Center, which Bemak directs. The symposium aimed to forge a shared understanding about the key issues that support a positive, nurturing, and safe school climate. 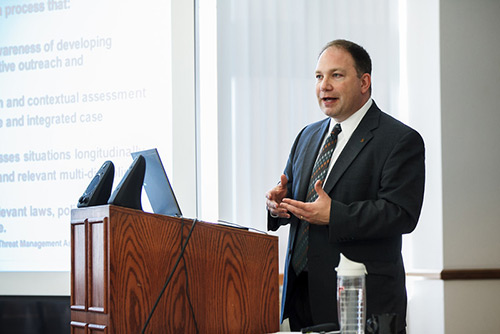 The question before the group: Should Mason create a regional community of practice among school professionals in order to address the prevention, preparation, and response to school violence from a mental health and student services perspective?

A critical issue for schools and communities

“It’s important to take this opportunity to be reflective rather than reflexive,” said Ginsberg, who is a psychologist in addition to his role as dean of one of the largest graduate schools of education in the country. “We need to be thoughtful in our consideration of the precursor issues to violence in our schools, while also being well prepared to deal with the consequences and impact of trauma when it does occur.”

Even as more incendiary debates rage over whether school personnel should carry firearms and other responses, the symposium focused on school violence from a preventative, mental health perspective. 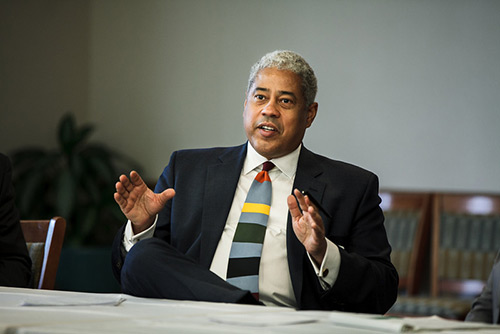 Chung noted that school counselors are sent in after a crisis, but could also play a larger role in prevention. Bemak spoke about the need to build a sense of community for the entire school. And Lawson remarked upon the “disaster surge,” a phrase that describes how, for every individual affected physically by a violent school incident, approximately four others will need the support of mental health specialists to be able to return to teaching or learning.

Notwithstanding horrific incidences such as Sandy Hook, the prevalence of school homicides is less than 20 victims per year nationwide and is trending downward, as is the number of U.S. homicides in general. Non-fatal victimization numbers at schools are large, however, and include bullying, threats, the carrying of weapons on school property, and other incidences that are traumatic to students and staff. “We are safer,” said Lawson. “But we don’t feel safer.”

Special Assistant Wilder provided a context for the discussions by reviewing the work of the Governor’s Task Force on School and Campus Safety, which provided initial recommendations on school safety and violence concerns. More than 10 wide-ranging bills and budgetary amendments resulted, including new legislation which expands current Virginia law by extending civil immunity to any person who reports, in good faith, information that an individual poses credible danger of serious bodily injury or death to students and others on school property.

In his remarks, Wilder touched upon the many sensitivities that the task force faced, including Second Amendment rights; the question of state mandates to localities; and the handling and storage of sensitive information in a way that balances privacy rights alongside the need for school and government officials to share information. 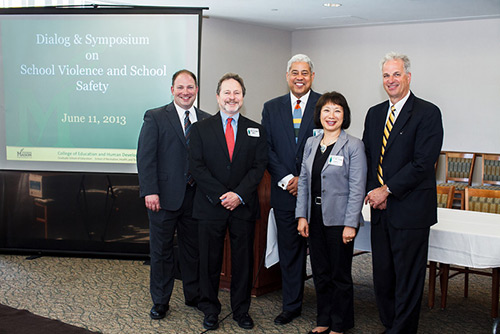 At the school or campus level, policies for dealing with targeted school violence also must focus on threat assessment. Lawson discussed his experience at Virginia Tech and how a recent incident resulted in many false reports on Twitter that ended up pulling away resources from the real crisis at hand.

In addition, schools must contend with a code of silence that exists in some high schools and the way modern communications make it possible for students to know ahead of time that a violent incident is going to happen. In schools without a sense of community, the student response to such information is often to gather and observe what’s about to happen rather than to report and prevent.

No profiles or easy solutions

In 2002, the U.S. Secret Service, in collaboration with the U.S. Department of Education, completed a report called the “Safe School Initiative” that studied school-based attacks. For the study, the Secret Service interviewed every school shooter who had survived and in almost each case the attacker had told someone about their ideas or plan ahead of time. Lawson noted that rarely was a targeted and violent incident at the school a case of someone “snapping” or a sudden and impulsive act. In addition, the study concluded that there is no one profile of students that is useful in predicting who is likely to engage in targeted school violence.

Bemak shared how his research shows that school violence is, in fact, a progression of small events and indicators. The entire school staff and students must share responsibility for noticing and addressing these and other concerns about school climate.

At Virginia Tech, which was thrust to the forefront of campus safety issues, these findings have translated into a two-prong approach based on watching, listening, and spotting behaviors. Lawson noted that the university offers both a “care team” to reach out to students who may need a sympathetic ear and a separate “threat assessment team,” which looks to answer whether a person is on a path to execute a violent plan.

What does make a difference

The issues are complicated and rooted in individuals as people who feel and act. As the U.S. Department of Education concluded, “There is no one solution – there is no one program – that you can put in place in your school that will resolve the problem of school violence.”

But what the Secret Service report, and the research of Bemak and others suggest, is that “environments in which students, teachers, and administrators pay attention to students’ social and emotional needs – as well as their academic needs – will have fewer situations that require formal threat assessments.”

The participants at the symposium concurred with the report’s statement that such environments are apparent when students have a positive connection to at least one adult in authority. “Human contact is like a universal template,” noted Wilder. “High contact is preventative in a whole host of situations.”

After Ginsberg, Bemak, and Chung led the participants in discussion, the group agreed to support CEHD’s intent to create a regional community of practice among school professionals in order to address school violence prevention, preparation, and response from a mental health and student services perspective.

George Mason University's College of Education and Human Development (CEHD) includes two schools, the Graduate School of Education, one of the largest in Virginia, and the School of Recreation, Health, and Tourism. CEHD offers a comprehensive range of degrees, courses, licensures, and professional development programs on campus, online, and on site. The college is distinguished by faculty who encourage new ways of thinking and pioneering research supported by more than $75 million in funding over the past five years.