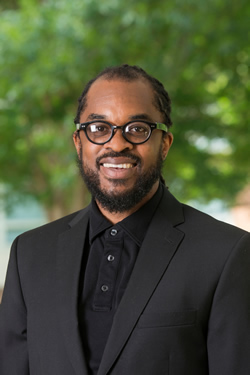 In his 20-year teaching career, College of Education and Human Development Professor Rodney Hopson has received several awards for his work in the field of evaluation.

But no award has yet compared to the American Evaluation Association’s (AEA) prestigious Paul F. Lazarsfeld Evaluation Theory Award. Recently, Hopson was named the winner of the 2017 award.

“It’s a high point in my career,” says Hopson, who has been at George Mason University for five years.

According to AEA, the Lazarsfeld award goes to someone whose “written work on evaluation theory has led to fruitful debates on the assumptions, goals, and practices of evaluation.”

Hopson has been a member of the AEA for more than 20 years, and served as its president in 2012. His research within the evaluation field often focuses on evaluating programs in education that focus on “underrepresented and traditionally underserved populations,” he says.

“My work generally asks questions around who benefits and who doesn’t benefit from education and schooling in our larger society,” Hopson says. “I’m looking at ways of building solutions—building bridges between institutions.”

In addition to decades of research work, Hopson contributed to that goal while at AEA by founding the Graduate Education Diversity Internship program, which chooses seven to 10 pre-doctoral students around the country each year and acquaints them with the evaluation field. He’ll be directing the program for the next two years, as well.

Currently, Hopson is working on a Mason-specific project. At Mason, students of color—in particular African American and Latino students—tend to do competitively well in terms of graduation rates compared to predominately white institutions. Hopson is working to determine what may be going on internally or institutionally that has led to this high graduation rate at Mason.

According to CEHD Dean Mark Ginsberg, the AEA award is a “very prestigious” honor for “a very distinguished and very approachable man.”

“It really reflects well on the whole of the college, on the kind of work that our faculty are doing,” Ginsberg says.

The award is named after the American sociologist who was a pioneer of social research, and previous award winners make up a who’s who of evaluation: Daniel Stufflebeam in 1985, Huey Tsyh-Chen in 1993, Marvin Alkin in 1995, and many others since the award’s inception in 1977.

“For my name to be associated next to theirs is kind of sweet as well,” Hopson says. “And it’ll be there for a while.”