George Mason University graduate Kathy Beatty was named the 2014 Outstanding Mathematics Educator of the Year by the Virginia Council of Teachers of Mathematics. 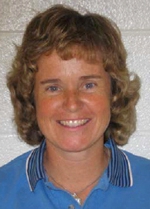 A mathematics teacher at Centreville High School since 1991, Ms. Beatty earned a master's degree from George Mason University in Curriculum and Instruction, with a concentration in secondary education in 1992.

"Kathy is a teacher and mentor to students and teachers alike in the truest sense of the word,” said Martin Grimm, principal of Centreville High School. He cited Beatty’s recent mentoring of a new calculus teacher while rewriting the school’s Advanced Placement (AP) calculus scope and sequence program.  “Kathy, of her own volition, took on the task of re-engineering our calculus program to match the needs of all of our students” while addressing their differing levels of math skills, said Grimm.

The William C. Lowry Mathematics Educator of the Year Award is presented each year by the Virginia Council of Teachers of Mathematics. It recognizes a classroom teacher at the elementary, middle, secondary, university and math specialist/coach level for his or her outstanding work in the field of mathematics.

Ms. Beatty serves as an instructor in Fairfax County Public Schools' Great Beginnings program for new teachers, and serves as a Teachers for Tomorrow instructor at her school, instructing students in the foundations of education to prepare them for internships in local elementary and middle schools. Ms. Beatty was a finalist for FCPS Teacher of the Year in 2011.