When he was younger, George Mason senior Mehdy Labriny thought he might someday grow out of his love of professional wrestling.

While it’s unquestionable that elite pro wrestlers are highly skilled athletes, the stage names, the drama, and the zany hype surrounding the sport admittedly aren’t for everyone.

“But there’s a saying, ‘Once a fan, always a fan,’” Labriny said. “There was a time when I was a kid, I thought, ‘I’ll eventually stop watching wrestling.’ But no matter how many times I stop, I always go back to watching it again on television or on my computer.” 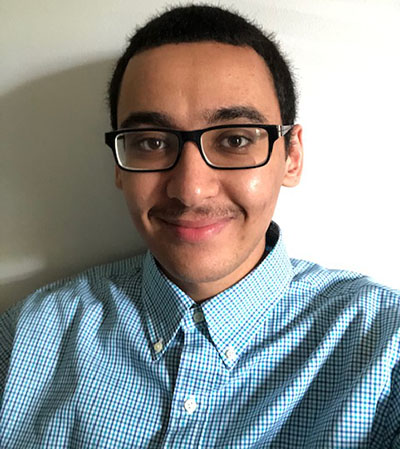 When it was time to pick an internship for this fall, Labriny at first ran into some roadblocks due to the coronavirus pandemic. The Woodbridge native knew he wanted to do something related to pro wrestling, but a few of the places he reached out to had closed offices and didn’t have remote options.

Then, he was able to find a good fit with Wrestling, Inc., a national web publication related to the sport with more than 25 million views on its YouTube videos and hundreds of thousands of followers reading its articles from its social media channels. Labriny himself was a consumer of the content.

Labriny, a sport management major and sport communication minor in the College of Education and Human Development, isn’t just learning the ins and outs of writing for publication; he is also learning how web platforms conduct business. And he is able to complete his internship remotely.

“Often, I’m setting up timestamps and transcriptions,” Labriny said. “For a timestamp, I’m watching or listening to an interview. At each timing, I write down what’s being discussed and talked about in each interview. Then, I’ll rank the interview 1 to 4 stars based on the importance of what’s being talked about. From there, I’ll email that to my supervisors. They’ll get back to me with what’s important. Then next thing I do is transcribe and email that to a supervisor again. They send that to veteran writers and publish articles where I’m a contributor credited at the bottom of the story.” 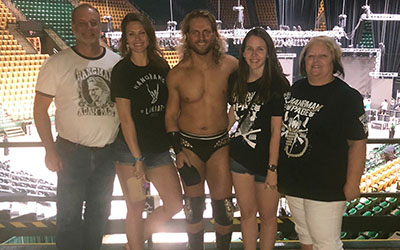 Labriny works directly with writer and editor mentors to produce aggregation stories (stories written from content and quotes found on the Internet and via YouTube) that drive big web traffic. He also writes byline stories of his own.

The 22-year-old said he felt comfortable jumping straight into writing stories in his first professional writing gig because he’d had a sport communication class at Mason over the summer where he worked on journalism topics like story structures.

“Professor Esherick talks about how you should always proofread any work before turning it in and about how it’s important to never be afraid to ask questions,” Labriny said.

Knowing Labriny’s interest in professional wrestling, Esherick also connected the senior with CEHD colleague Stormi Woltz, who works in the college as a student academic success coordinator and whose brother is the popular wrestler “Hangman” Adam Page of All Elite Wrestling. Esherick introduced Labriny and Woltz via email and they met at Woltz’s office on campus to talk about the sport and the surrounding business.

“Mehdy and I talked wrestling and he just absolutely lit up. He could tell me things about my brother as Adam Page that I didn’t even know,” Woltz said. “Because I knew Mehdy was coming by I wanted to make sure he didn’t leave my office empty-handed, so I made sure that my brother was available during our meeting.

“I was able to FaceTime my brother into our meeting to meet Mehdy, and I’m not sure who was more excited, Mehdy or myself. It’s not often you get to see students truly excited and into something so passionately, and when you are able to share that with them it makes it all the better. That day when Mehdy left my office he told me it was the best day of his life, and I just could feel the excitement he has in this field that he has chosen for his career.”

Labriny competed on his high school’s wrestling team back in Woodbridge, and his love for the pro wrestling variety of the sport continues to thrive into his college years. He said he hopes to continue working in the sport beyond graduation, and he believes he’s found his niche.

“I always had an idea that I wanted to be involved in wrestling, but I didn’t know what that would be specifically,” Labriny said. “When I got to Mason after community college, I thought, ‘I can be a wrestling journalist because wrestling is something that I’ve known about and loved my whole life.’”