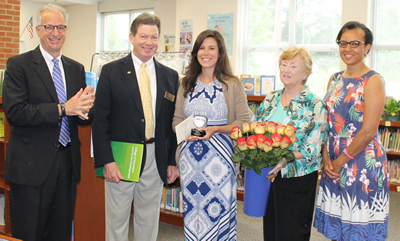 Teachers, administrators, and representatives of the College of Education and Human Development (CEHD) at George Mason University gathered at Westlawn Elementary School for a reception to honor Kaleigh O’Donnell.

O’Donnell (MEd ’15) is the 2017 recipient of Apple Federal Credit Union Education Foundation’s Exemplary Early Career Teacher Award. The award is given to an alumnus or alumna of CEHD who has demonstrated excellence, leadership, and innovation in the classroom within the first three years of teaching in Fairfax County Public Schools (FCPS).

Eligible teachers are nominated by principals and other administrators, fellow teachers, CEHD faculty, or other community members—anyone familiar with the excellence a teacher has shown in teaching and leadership. The winner receives $2,500 and a special crystal apple trophy.

O’Donnell graduated from CEHD’s Elementary Education Program and currently is a 5th grade teacher at Westlawn. She was nominated for the Exemplary Early Career Teacher Award by Westlawn Assistant Principal Michelle Doyle.

Doyle noted in her nomination letter that "Ms. O’Donnell sustains an environment of high engagement, open student discourse, and risk-taking in order to maximize student learning” and that “her enthusiasm shows on her face, through her positive teacher language, and in the quiet energy she projects while teaching." O’Donnell’s students, she said, “respond with eagerness to learn and a sense of energy."

Westlawn, a Professional Development School for the CEHD Elementary Education Program, had formed a committee to select which early-career educator to nominate for the award since only one nomination per school can be made each year. Principal Linda Ferguson noted that "Westlawn is truly blessed with having so many wonderful, talented new teachers in addition to the outstanding experienced teachers on our staff. It was a close decision." The other eligible teachers were also recognized during the reception.

In her nomination statement O’Donnell wrote, "A close community and a safe space lead to open dialogue across all content areas…there is no room for fear in the classroom, and my students know that it is human to make mistakes. They understand they can always turn those mistakes into opportunities to learn." She added that the Elementary Education’s "intensive year-long program was instrumental in shaping [her] as a teacher."

ODonnell credited and thanked Audra Parker, academic program coordinator for the Elementary Education Program and site facilitator at Westlawn, for being "an exceptional influence on my teaching career…challenging, engaging, and organized."

Former long-serving FCPS administrator Sylvia Auton, who chairs the award committee, said of O’Donnell, "She exemplifies everything that we hope to see in our young career educators: well-trained, passionate, and dedicated to her students and school." Steve Sengstack, executive director of the Apple Federal Credit Union Education Foundation and also a member of the committee, stated that "the Foundation is always pleased to support the work of teachers and to recognize and honor excellence in our local public schools."

CEHD Dean Mark Ginsberg congratulated O’Donnell and noted the success of the Elementary Education Program’s professional development schools network, which is supported by FCPS. He stated that "it was a strong collaborative effort, one among many between the college and Fairfax County."