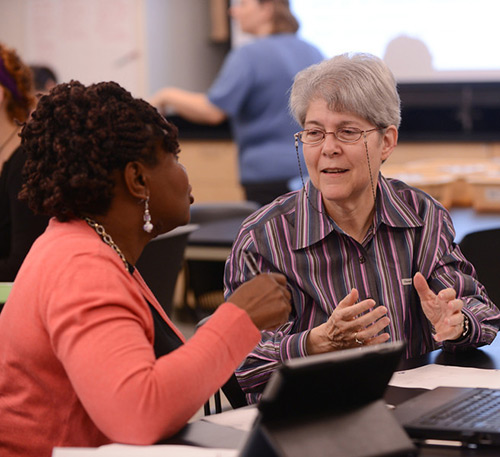 George Mason University is deeply saddened to note the death of Donna Roudabush Sterling, a professor of science education in the College of Education and Human Development. Sterling died on June 24 at her home in McLean, Virginia, after a battle with pancreatic cancer. She was 65.

Sterling joined the faculty in 1993, and was named a Distinguished Service Professor by the university in 2013, one of only eight to hold this academic honor at Mason. Reserved for outstanding professors whose scholarly and service contributions are far reaching and have had an extraordinary level of impact, the honor is among the highest conferred by the university.

“Dr. Sterling’s research over the course of her career has significantly advanced science education throughout the Commonwealth of Virginia and across the United States,” said Mason President Ángel Cabrera. “We mourn the loss of a leading researcher and educator whose leadership profoundly benefited students and broadened the educational impact of the university.”

A letter of appreciation was received by Donna Sterling from President Barack Obama recently, and a resolution commending and expressing appreciation for her commitment to the education of the Commonwealth's next generation of leaders was passed by the Virginia General Assembly on June 12, 2014. A resolution also was recently introduced into the Congressional Record by Representative Gerry Connolly.

Sterling taught at George Mason University for more than 20 years, where she served as the director of the Center for Restructuring Education in Science and Technology and the principal investigator for the Virginia Initiative for Science Teaching and Achievement (VISTA). She was a pioneer in science education, and her research formed the basis for VISTA, a $28.5 million U.S. Department of Education i3 validation grant-supported program that is spearheading STEM instruction throughout the state. It is the largest grant ever received by George Mason University and among the largest U.S. federal research grants ever awarded with a focus on STEM education. She was also the author of more than 100 scholarly articles, books, and reports.

"For more than 14 years, I watched Donna Sterling grow in stature as a research scientist, teacher educator, and colleague,” said Peter Stearns, University Professor and Provost. “Her entrepreneurial spirit and academic leadership are admired as qualities we find in Mason’s best professors. Her contributions to science education have been literally national in scope. She will be missed."

Sterling grew up in Sacramento, California and received an EdD from George Washington University in 1992. A research scientist in chemistry before coming to teaching, she completed her early training under two notable Nobel Prize recipients, Linus Pauling and Melvin Calvin.

Over the years, Sterling's research garnered major funding from numerous corporations including Exxon, Northrop Grumman, Boeing, Micron, and Dominion Virginia Power, and organizations such as the National Science Foundation, American Association for the Advancement of Science, Carnegie Institution of Washington, U.S. Department of Education, and the Virginia Department of Education.

Long recognized for her work to improve the teaching of science and technology in elementary and secondary schools, Sterling was the principal investigator on more than 25 grants for STEM teacher professional development and research. Her collaborations with Mason’s education, science, engineering, and mathematics faculty to investigate research-based effective teaching and learning have yielded more than $50 million in research grant funding and placed her among George Mason University’s top research grant recipients.

“This is a great loss for the College of Education and Human Development, the university, and for me personally,” said Dean Mark R. Ginsberg. “Donna was a tireless researcher and supporter of science education. By inspiring teachers to inspire students, she encouraged countless numbers of young people to unlock the mysteries and wonders of our world through scientific discovery.”

In a 2009 interview with the Mason Spirit magazine, Sterling noted that her work challenges the status quo for teachers, but she does it for good reason. “Teachers want to teach science how they learned it,” she said. In many cases, this means using a PowerPoint that provides all of the answers. “I tell them, ‘The information is great, the science is good (assuming it is), but that’s not where we need to start with this age group.”

Sterling’s work tapped into students’ curiosity and she advocated for approaches that involved teaching that is rooted in problem-based and inquiry-based learning. “We try to help teachers envision what science in the classroom can be,” she said.

Associate Professor Wendy Frazier worked closely with Dr. Sterling for more than ten years. “She was a role model and mentor to generations of teachers and colleagues,” said Frazier. “Her determination and passion inspired graduate students to pursue science – both for themselves and for their students – and leaves us with an enduring legacy.”

A board member of the Virginia Mathematics and Science Coalition, Sterling was Virginia’s most senior science education professor. Frazier recalled that Sterling always believed it was tremendously important to reach beyond Mason’s borders to collaborate with fellow university professors on behalf of Virginia students.

“Dr. Sterling has been a significant presence in Virginia science education during my entire professional career,” said Jacqueline McDonnough, associate professor of science education at Virginia Commonwealth University. “She has served as a teacher, science educator, researcher, mentor, and visionary. Her work in science education, especially the VISTA project, will impact generations to come."

"For decades, Donna Sterling has been a key player in science education in Virginia, influencing our ideas about the preparation of K-12 science teachers," said Juanita Jo Matkins, associate professor of science education at the College of William & Mary. "She believed that students in public schools deserved the very best science instruction possible, and she never wavered from the path of training teachers to deliver the highest quality science instruction."

Sterling is survived by her husband of 44 years, David Sterling; two children, Douglas and Dana; and two grandchildren.

A memorial service will be held on Saturday, August 16 at 10 am at Immanuel Presbyterian Church at 1125 Savile Lane, McLean VA 22101. A reception will follow the service.

Donna Sterling will be interred at Arlington National Cemetery on August 21st at 11:00 am. Cemetery officials ask that all who attend the burial be at the Administration Building 30-45 minutes prior to the scheduled burial. Information on Arlington Cemetery can be found at http://www.arlingtoncemetery.mil/Funeral-Information. Directions to the cemetery are at: http://www.arlingtoncemetery.mil/Plan-Your-Visit/Getting-Here/Directions

In the upcoming academic year, the College of Education and Human Development will host a symposium to celebrate Donna Sterling’s life, work, and legacy, and to share knowledge about the current state of the art regarding the issues for which she so passionately worked. Details are forthcoming.

Photos and remembrances of Donna Sterling are posted on Facebook at http://www.facebook.com/masoncehd.

George Mason University's College of Education and Human Development (CEHD) includes two schools: the Graduate School of Education, one of the most comprehensive education schools in Virginia, and the School of Recreation, Health, and Tourism. CEHD offers a full range of courses, certificates, and degree programs on campus, online, and on site to more than 4,000 students each year. CEHD is fully accredited by NCATE and all licensure programs are approved by the Virginia Department of Education.