Jackson, now 25 and about to begin her second year at Mason, said the email set the tone for her master’s degree experience.

“I went to that BEATS meeting and I immediately felt a sense of closeness because there were a lot of individuals at the meeting who looked like me and kind of had the same mindset,” said Jackson, who is Black. “It was just amazing. Even though it’s a smaller percentage of us in the field, we are definitely sticking together so we can help each other in the long run.”

At Mason, minority representation has increased in the Athletic Training program in recent years. Many within the program attribute that to the BEATS program and how it successfully engages students as well as program faculty and alumni by offering an outlet for them to stay involved as mentors and invest in student success. 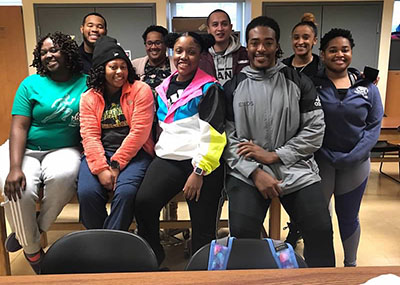 In the eight years since BEATS was started, Mason’s attrition rate for students of color in the Athletic Training program has decreased from 90 percent all the way down to 10 percent. That’s given the program more diverse representation; in a field with less than 10 percent coming from an underrepresented minority background, Mason’s program is now 50 to 60 percent students of color.

“Part of the problem in the field as a whole has been athletic trainers often still don’t look like the population they’re serving,” said Lacayo, an athletic training professor and program coordinator for BEATS. “Any time you can have a diverse group in an organization, you’re getting more perspectives, different ideas, different voices. When you have diverse athletic trainers in the workplace, you’re getting those things and also improving patient care because patients will open up differently for healthcare providers of different backgrounds.”

The BEATS program began with a grant that stemmed from a call from the National Athletic Trainers’ Association (NATA), which was looking for plans to address the national issue of minority student retention in the field. A Mason team of Lacayo and Amanda Caswell, director of the School of Kinesiology, who Lacayo calls her “co-change-maker,” submitted the idea for their mentoring program idea, BEATS, and received a grant.

The program began with 10 students and has fluctuated in size, largely because the Athletic Training program has shifted from an undergraduate program to a master’s degree program in recent years. Students meet with a mentor twice in person during the school year. The larger BEATS group meets for three events per year to talk about subjects like test-taking skills, résumés, and networking in the field.

Students also speak with their mentors on a weekly basis over the phone, and there are almost constant informal check-ins with the group, especially now with the pandemic when many students say they wish to feel more connected, Lacayo said.

While less face-to-face contact happening since the pandemic has caused its share of challenges in higher education, BEATS recently was able to turn that into an advantage when the group hosted guest speaker Ernest Eugene, head athletic trainer for the NBA’s Orlando Magic, as part of a virtual breakfast in June.

“It was very inspiring to hear his story because he’s from Maryland,” Jackson said. “He grew up where I grew up, and seeing him reminded me that I could do what he’s doing.” 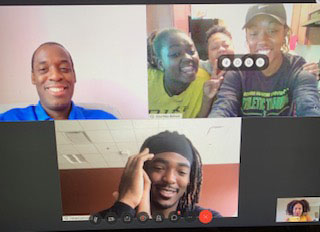 Lacayo said bringing Eugene to her students was the first time they’ve brought in a guest of that stature, but she expects to do more of it.

“It was very cool for the students even though [Eugene] is a friend of our program and he’s from nearby,” Lacayo said. “He’d have probably had to fly in if the event wasn’t virtual and might not have had time. But because we’re all at home right now and virtual he was able to do that.”

Jackson said she’s really enjoyed the speakers and the bonds with her peers in BEATS. But she said the mentoring she’s received from honest and open veteran students—who would make clear how challenging some aspects of the program could be and how to overcome them—and from professors has also been very valuable.

In a conversation with Lacayo, Jackson once mentioned she knew just a little American Sign Language, meaning she knew the alphabet from years of hanging up wall decorations in her mother’s classroom and eyeing the alphabet and practicing it from time to time.

Lacayo arranged as a challenge for Jackson to take a practicum assignment this past semester in the athletic department at Gallaudet University, a federally-chartered university in Washington D.C. for people who are deaf or hard of hearing.

“I was like, ‘Wow, thanks, Dr. Lacayo,’” Jackson said with a laugh. “I appreciate her for that because I was scared. She put me in a position where I’d have to use those skills. But it turned out great and my sign language has improved, and now I’m even thinking about working more with special populations because it was fulfilling.”

Jackson worked with Gallaudet’s baseball and football teams. She said some of the teams at the university had players who had some degree of hearing but that the baseball team was mostly made up of players who were deaf.

“It was really cool to watch them,” she said. “It’s interesting to see how hearing or not hearing plays a role in sports.”

After coming to Mason following a bachelor’s degree from Delaware State University, a historically Black college, and with a couple years in the workforce, Jackson said she’s now looking for employment in a non-traditional athletic training career after graduation next year, perhaps somewhere such as Universal Studios, Walt Disney World, or Cirque du Soleil.

“She’s one of our most active students. She doesn’t miss an event,” Lacayo said of Jackson. “That whole group, our rising second-year students, they see invitations to events, they’re responding immediately. Brittany is one of those where she’s going to be there, be excited, and she’s going to participate and have great questions for whoever is the guest speaker. She’s always like, ‘When are we getting together again for BEATS?’”