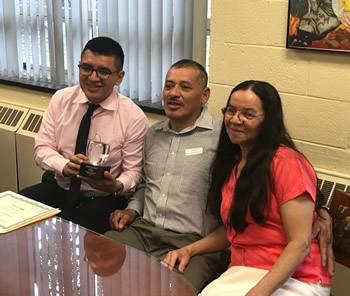 Dennis Nolasco’s parents immigrated to the United States from El Salvador. His father reached the 4th grade before dropping out to work on the family farm. His mother had never seen a school until she came to the U.S.

Years later, Nolasco used his family’s experience as inspiration to get his license to teach English for Speakers of Other Languages (ESOL).

In May, he received the Exemplary Early Career Teacher Award from the Apple Federal Credit Union Education Foundation, which honors his budding teaching career.

“I was shocked,” says Nolasco of his reaction to winning the award. “I was just speechless . . . but very grateful.”

The award is given to a currently employed teacher in Fairfax County Public Schools who has between one and three years of teaching experience and is also a graduate of the College of Education and Human Development (CEHD). Nolasco, an ESOL teacher at Cooper Middle School, recently received his master’s degree from CEHD with a focus in multicultural/multilingual education.

For the past two years, Nolasco has worked as an ESOL teacher with students with the sort of varied cultural experience as his own parents and family.

“Middle school is a great age—they’re just so full of energy,” he says. “They’re at that sweet spot where they’re young enough to still have fun and be silly and play games, but they’re old enough to think about challenging topics and have a discussion about current events.”

“When you enter Mr. Nolasco’s class, you will find high energy as well as someone who cares passionately for each individual student,” she states in Nolasco’s nomination form. “His knowledge of standards, as well as his unique knowledge and understanding of young adolescent literature, enhances the learning experience of his students.”

Nolasco says that he hopes to build his skillset by learning content from subjects outside his own—working with science and history teachers, for instance, to get a better understanding of their subject areas. By sharing expertise, he hopes that ESOL students will have less of a language barrier across all their subjects and that teachers throughout the school will be more culturally proficient and empathetic.v

“My biggest word is ‘empathy,’” Nolasco says. “My approach to education is empathy. I try to put myself in the students’ shoes—especially my students, because they come from other countries and other cultures and languages.

“I’m not just a teacher,” he says. “I’m a person. Their person. And together we create our knowledge.”