Whether that was attending games as a kid with his dad, who was a scout for the Tampa Bay Rays; pitching and, eventually, coaching for George Mason; playing in the minor leagues; or as a student in the classroom at Mason, he’s made sure to maximize his experiences as he now readies to advance his career as a young coach.

Ricci, currently serving as a graduate assistant coach with Mason’s baseball team in his second season on the staff, is on track to graduate with a master’s degree in sport management this summer. This comes on the heels of receiving his bachelor’s degree in kinesiology at Mason in 2019.

And all the baseball knowledge is starting to pile up. 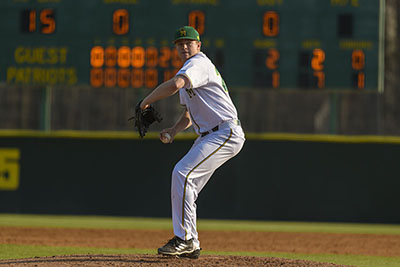 “There’s a lot of research now that shows that the more a pitcher throws at a higher velocity, the more stress on the elbow. But another reason I’m also looking into this is when pitchers have more than one pitching coach and they struggle to follow one straight template program, [they] combine [the programs], and it leads to an overuse injury.”

In addition to graduating in the coming months, Ricci hopes to soon land a position as a pitching coach somewhere.

The coronavirus pandemic has certainly affected the college baseball landscape, but he said he’s hopeful that once things begin to improve with the pandemic, movement will pick up again nationally on the job front.

His ultimate goal, he said, is to eventually become a college head coach.

“He’s going to be an outstanding coach, and the opportunity to get a grad degree was right there for him,” George Mason head coach Bill Brown said. “It was really the best of both worlds. He got coaching experience to put on a résumé, which he needed. And he got an advanced degree, which helps him as he looks to secure a full-time job.”

Ricci had a standout pitching career for the Patriots. He ranks near the top of the team record books in appearances (70), most of them coming in relief. The right-hander made adjustments to overcome some early career troubles on the mound and finished the 2018 season, his senior year, with career- bests in ERA (2.36), innings pitched (34.1), and strikeouts (29).

As a senior sign for the Arizona Diamondbacks organization, he had some undergraduate coursework remaining when he left school to pitch in the minors for the summer of 2018.

While he could have stuck it out longer in the pros after his 2018 showing, based on his statistics with the Arizona League Diamondbacks and Single-A Hillsboro Hops, a major factor that brought him back to Mason was unfinished work in the classroom.

There was also knowing deep down, he said, that coaching was his ultimate goal and where his career in the sport likely held the highest ceiling.

“I couldn’t wait to get back and get started, honestly,” Ricci said.

Ricci still admits it was a difficult decision to decide to end his playing career, but strong mentors were also waiting for him back at Mason.

“Coach Bill Brown has done everything for me,” Ricci said. “I learned so much playing for him, and now coaching for him. He’s one of the best in-game managers in the game, and I’ve picked up traits from him I can carry with me for the rest of my career. Having been there around 40 years, he’s seen everything. Something he’s taught me that has stuck with me is that when emotion walks in the door, logic walks out. He tries to handle decision making logically and doesn’t let emotion get into his head.”

Stops along the way

Aside from playing and coaching at Mason, Ricci has picked up many other lessons along the way.

“With the Diamondbacks organization I was around so many great baseball minds I was able to learn from,” he said. “I took that summer knowing I was going to take a lot away for my coaching career. That was really beneficial.”

Added Brown: “He’s really checked all the boxes of putting himself in the position to run a pitching staff and have a head coach trust him to run a pitching staff in every aspect. Not just on the finer points of pitching, but how players need to take care of themselves and the right exercises to do, the types of programs the kids need to embrace in order to make themselves a bigger, stronger athlete.”

Then, there was his time in the classroom at Mason.

“For my [undergraduate] kinesiology degree, what I really liked was they require you to take internships,” Ricci said. “I got some great experience. I interned at Explosive Performance, an athlete training company in Loudoun County, and did a sport and spine rehab internship with Mason’s athletic department. That experience in strength and conditioning is really benefitting me as a young coach.”

For his graduate work, Ricci has been able to also tie leadership theory to his practical knowledge from his time playing and coaching baseball, and he said he’s already seen it pay some dividends.

“I’ve learned a lot about coaching philosophies,” he said. “[Interim Dean] Dr. [Robert] Baker has been one of my favorite professors. The program has inspired me to research more and read more and find out what’s out there that can help me to improve.”

This season, of course, was unusually difficult for anyone involved with college baseball.

After an offseason of hard work by players and coaches, the season needed to be cut short due to the pandemic just as the schedule was getting meaningful.

“There were a lot of players on that team this year who really cared and did everything they could to get better. It was disappointing not to even get to show what we could do in conference play. Conference play is everything for us,” Ricci said. “I’m just doing everything I can for the guys at Mason during this time.”

In the long run, Ricci said he’s very optimistic about the program at Mason and about his own future now as a college baseball coach.

“I always knew I wanted to stay in baseball,” Ricci said. “I grew up around it. I found a love for evaluating talent and being around the game. Just in talks with my dad and after my college baseball playing experience, I figured out that college coaching is what I wanted to do.”