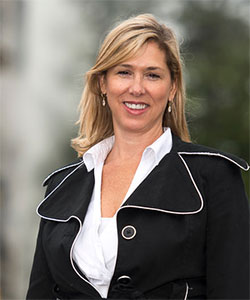 At 9:15 on a rainy Thursday morning a police dispatcher radioed a call to emergency medical technicians: “There is an accident with injury, a single vehicle with the patient not acting appropriately at 4600 West Ox Road.”

A late-model blue BMW had crashed. The driver, sitting upright, wasn’t moving or responding to the arriving EMTs who pulled up in an ambulance followed by a fire truck. Unbeknownst to them, the driver was suffering from serious internal bleeding. The driver was carefully removed from the car and strapped to a gurney before being loaded into the ambulance and taken to the hospital.

The “driver” was in fact a manikin, a life-sized accident victim equipped with two electronic beacons that were pinging every three seconds to receivers at Inova Fairfax Hospital. The vehicles, equipment, EMTs, emergency room personnel and others involved in responding to the emergency were also equipped with Bluetooth beacons that recorded their proximity to the manikin, which was relayed in real time to observers at the hospital. 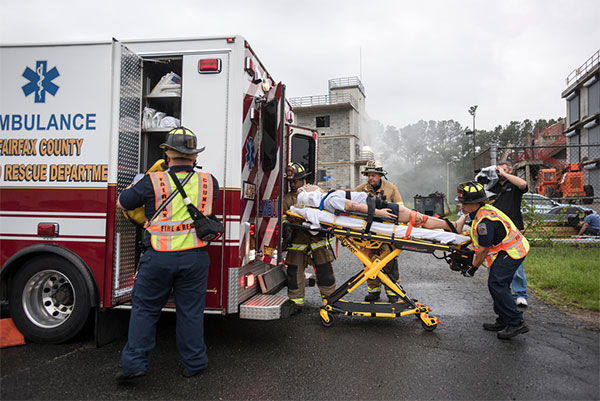 The original idea, Bannan said, was a response to a request by Inova to help them minimize difficulties in what they call the hand-off process, when a patient is transferred from the ambulance to the emergency room to the operating room. The data will show where there was lag time between decisions and actions, how resources were used and other aspects of handling a crisis.

She believes it’s the first time a simulated accident providing immediate feedback has been studied this way. 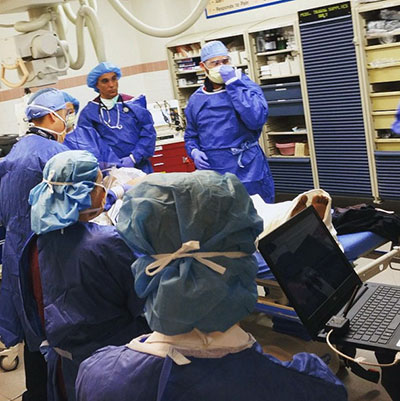 The simulation was a proof-of-concept to determine whether an "Internet of Things" approach can enhance emergency training and response by providing an additional window into the movements and actions of individuals and teams in relation to a patient's care. Photo courtesy of Shelly Blake-Plock.

Results: The proximity beacons transmitted 14,239 proximity data points in about an hour. This allowed emergency response and hospital teams to immediately see the pre-hospital and in-hospital activity and proximity to the patient in the simulation in real time. The EMS Activity Monitor allowed participants to see key in-bound events related to the status of the patient prior to patient arrival in the emergency department. This data will complement and inform more than eight hours of video and audio data captured by approximately 12 cameras for research. 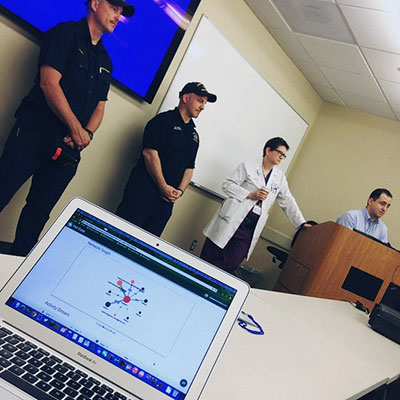 Afterwards, the participants took part in a debriefing session. "We wanted to see whether this information could provide participants with a deeper reflective and collaborative learning experience immediately after the simulation in the debrief -- the point where research says the most learning occurs for these high-stakes team situations," said Bannan.

The results of the simulation will be presented at the Global City Teams Challenge Expo at the National Building Museum in Washington, D.C., on June 1, an event sponsored by NIST (National Institute of Standards and Technology) and US Ignite. The team is representing the City of Fairfax with its project called “Ecosystem for Smart Medical Team Training.”

This article was written by Buzz McClain for Mason News.