Alumna Honored as Finalist for 2014 National Teacher of the Year

Melissa Porfirio calls it a “tremendous honor.” The alumna of George Mason University’s Graduate School of Education was among four finalists honored May 1 by President Obama at a White House ceremony announcing the 2014 National Teacher of the Year.

Porfirio earned her master’s degree in education curriculum and instruction in 2005 from George Mason’s College of Education and Human Development and has taught at Crestwood Elementary School in Fairfax County, Va., since then. As a first grade team leader at Crestwood, she works with her colleagues to ensure each child’s individual needs are met, and they are prepared for second grade. The group analyzes student performance, shares teaching strategies and uses data analysis to adapt instruction for each child. 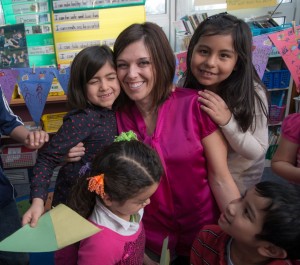 Mason alumna and Teacher of the Year finalist Melissa Porfirio and some of her students at Crestwood Elementary School in Springfield, Va. Photo by Evan Cantwell.

“Students do not arrive in our classrooms as blank slates for us to just fill up with information,” says Porfirio. “They come to us with hopes and dreams and an inherent excitement for what they want to learn about. Through community building and rules and procedures we design as a class, I create an environment that is welcoming and safe, builds confidence, enhances strengths, encourages students to take risks and exposes them to all of the possibilities that come through learning.”

During a recent visit to her classroom in Springfield, cheers of “Best teacher ever!” and “I love her so much because she makes us learn!” echoed among Porfirio’s diverse young students as she energetically led them in the day’s assignments. For Porfirio, the lessons are not just in reading, writing and ‘rithmatic. They are inside and outside the classroom.

“The number one thing that you must always remember: Your students are people,” advises Porfirio. “You need to learn who they are as a person, each and every one of them. You need to know their families and welcome them and include them. The standards, the curriculum, the way you teach―all of that comes after you know who they are as people.”

Porfirio earned Virginia’s top honor last September from among eight 2014 Regional Teachers of the Year finalists named by the Virginia Department of Education. She also was named 2013 Teacher of the Year in Fairfax County and earned the 2012-13 Washington Post Agnes Meyer Outstanding Teacher Award. She received Crestwood Elementary School’s Human Relations Award in 2008.

At Mason, Porfirio also earned her licensure in early childhood education, early childhood special education and English as a Second Language education. She received the 2014 Distinguished Alumni Award from the College of Education and Human Development at George Mason University.

“What particularly drew me to Mason was the program included culturally, linguistically and ability-diverse as well as socioeconomically diverse students. Coming from a social work background, I thought it was perfect; it brought it all together―of how I want to include my families and help all of my students feel welcome and honored for who they are. That was the perfect program for me as an educator.”

The article above was written by Sudha Kamath and originally appeared on Mason News.