2014 Virginia Teacher of the Year Melissa Porfirio is CEHD Alumna 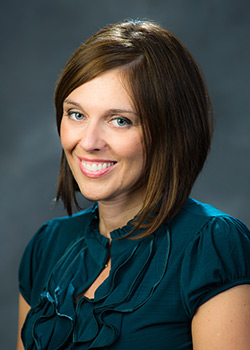 Ms. Porfirio just learned in January that she is one of four finalists for the 2014 National Teacher of the Year award.

Ms. Porfirio, a teacher at Crestwood Elementary School in Springfield, Virginia, was one of eight teachers from across the state up for the honor. She is now Virginia's nomination for the national teacher of the year award.

A Washington Post article announcing the news noted that "Porfirio was stunned when the state superintendent for public instruction, Patricia I. Wright, made the announcement during a ceremony in Richmond."

Principal Timothy Kasik has praised Ms. Porfirio for the efficient way her classroom runs. “It is always amazing to see how smoothly everything functions,” he explained when Melissa Porfirio was named the county's Teacher of the Year. “The students have routines and systems in place for all transitions and there is never a moment of down time.” Kasik also noted that Ms. Porfirio has a way of making learning fun for her students. “Her students love coming to school and each one of them always has a smile on his or her face,” he added.

As the first grade team leader, Ms. Porfirio works with her colleagues to ensure that each child’s individual needs are met and they are prepared for second grade. The group analyzes student performance, shares teaching strategies, and uses data analysis to adapt instruction for each child.

“Students do not arrive in our classrooms as blank slates for us to just fill up with information,” said Ms. Porfirio. “They come to us with hopes and dreams and an inherent excitement for what they want to learn about…Through community building and rules and procedures we design as a class, I create an environment that is welcoming and safe, builds confidence, enhances strengths, encourages students to take risks, and exposes them to all of the possibilities that come through learning.”

Ms. Porfirio has taught at Crestwood Elementary School since 2005 and received the school’s Human Relations Award in 2008. She also received the 2013 Teacher of the Year Award from Fairfax County Public Schools and the Washington Post Agnes Meyer Outstanding Teacher Award for educational excellence.

"Melissa was a dedicated student and a reflective learner committed to working on behalf of culturally, linguistically, and ability diverse young children and their families," said Julie K. Kidd, associate professor and Early Childhood Education academic program coordinator in the College of Education and Human Development at George Mason University. "The faculty congratulates Melissa on her accomplishments and appreciates the important work she does with children and families."

While at the university, Ms. Porfirio earned a master's degree and licensure in early childhood education, early childhood special education, and English as a Second Language education while focusing on culturally, linguistically, and ability diverse young children and their families. She noted about her George Mason University experience: "I'm so excited to share the path that my indescribable education at George Mason has taken me. I am a proud Patriot!"

Porfirio earned a bachelor’s degree in social work from Catholic University before coming to Mason. Prior to becoming a teacher, she was a social worker in North Carolina and Washington, D.C., and taught English in Seoul, South Korea.

Other graduates from George Mason University who have been honored as Virginia Teacher of the Year include: